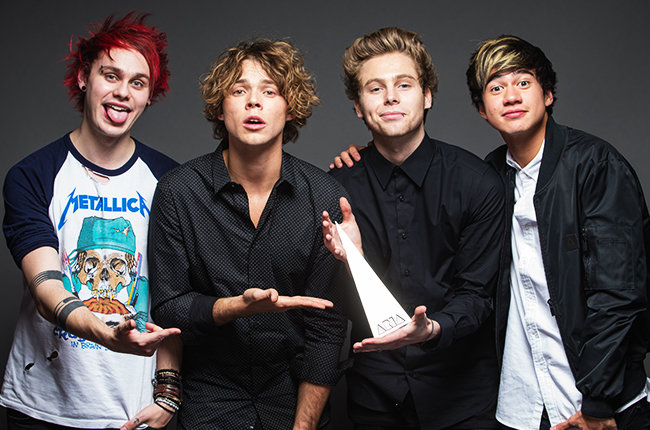 We’ve been with you 5SOS Fam, through these endless months of suspense, awaiting brand new tracks from the guys.

But we are more than pleased with the outcome of the sophomore album ‘Sounds Good, Feels Good’ and its fair to say our eardrums were not prepared for such a creditable level of musicality, vocals, lyrics – and not forgetting those very impressive interlopes.

Considering it has been just over a year since the Aussie’s debut album, self-titled ‘5 Seconds of Summer’ was released, they couldn’t come any further and it’s evident to say that these familiar faces have gone from boys to men. Within the new album, there are signs of maturity that are highlighted through a number of personal and very intimate topics which are brought to surface, such as divorce and depression. The underlining messages in each of the tracks, collectively, reflects the idea of ‘The New Broken Scene’ that the guys are enforcing upon their fans – portraying worth of each individual.

‘Jet Black Heart’ and ‘Castaway’ are most definitely the highlights of the album for us, bringing out a real moody and edgy punk vibe which we can only predict will go down incredibly well live.

This track is a much darker song than we have ever heard from the guys before. It reminds us of a Green Day-meets-Good Charlotte vibe, which would be the most insane collaboration EVER, so you can only imagine how good this song truly is. Pulling from the emotional side of the pop-punk genre, “Jet Black Heart” features a chorus of guitars and smashed drums, which blend together with deep lyrics.

A hit we believe would SMASH the charts as a single… You listening boys?

Favourite Lyrics: Everyone has their demons, even wide awake or dreaming.

Castaway brings very energetic and impressive drumming from Ashton, which has the beat of this track going straight through us and leaves our heads uncontrollably rocking. It will easily be a crowd pleaser on 5SOS’ Sounds Live, Feels Live Tour which will be heading to the UK April 2016.

Will you be there?

Favourite Lyrics: Heartbreak that I can’t escape, a sinking ship I’ll never save.

Credit to John Feldman who produced this album alongside the 5SOS guys.