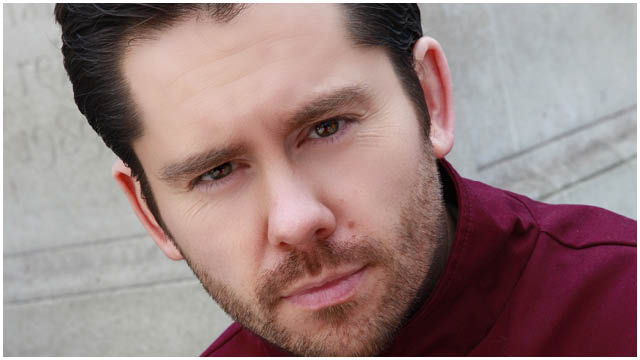 We’ve been very lucky in obtaining a number of interviews with the cast of new film Amar, Akbar and Tony.

Actor Martin Delaney, who plays Tony in the film and is a very familiar face from the TV, Film and Stage worlds sat down to answer a few of our questions about the film, how he feels about making the transition from TV to film, starring alongside Daniel Radcliffe in a new Hollywood film and being single.

We are about to see you on the big screen in Amar, Akbar and Tony as Tony, an Irish Catholic lad in love with an Asian woman, What was it about this role that you felt you just had to be a part of the film?

I really liked the role when I read the script; I just thought there was a lot of potential to make Tony quite entertaining and funny. He is basically punching above his weight and in love with a girl called Nita (played by Manrina). Being obsessed with a girl who’s out of his league is clearly a sad situation, but I found his determination to find the Asian girl of his dreams quite endearing. He’s the underdog and I’ve always loved an underdog.

There has been quite a bit of a backlash about the lack of diversity in British TV and Film, Do you think this film is about to change that view? If so why?

Well, as much as the movie wasn’t made for this purpose, it’s certainly an interesting time for it to be released. You’re right, there has been a lot of talk about content in film not being diverse enough but I’m not sure if Amar, Akbar & Tony can do anything to tip that scale. What I would say is that this movie is a more positive mirroring of multicultural London, and I think that has to be a good thing. The themes and challenges in this film are completely universal, and although it’s a film about a Sikh, a Muslim and a Catholic, it’s not their difference in cultures that negatively impact the trio. I loved that about the piece. I think that alone is an important message today.

Have you ever encountered any issues that come up in the film in your own life?

I’ve never really chased a girl in the way that Tony does in the film. However, I do identify and admire the resilience he has as a character. No matter how impossible the task may seem, he is unwavering. He’s totally determined to find the Asian girl of his dreams and his outrageous efforts that meander him along that way are truly laughable, yet admirable. I can identify somewhat with that goal setting that he has. Growing up, telling people that I wanted to be an actor was without exception met with a negative comment… every time. “It’s a tough industry, that.” Or “Make sure you work hard towards something else, so you have something to fall back on.” All fair advice but no one ever said anything positive straight away. There was no “Good for you!” Or “Oh, that would be a fun career.” I can’t blame others for having their fears towards such a precarious life choice, but for me, there was no ‘impossible’ and I have to thank my parents for that one. I wanted to be an actor at a very young age, and no challenges in the business have put me off to date. It’s a lovely industry to work in, there’s no doubt about that in my mind.

The cast has many British familiar faces (including your own) from the world of TV, How easy is it to make that transition from TV to Film?

I love working in film! And yes we have a lovely cast, who between them has made a lot of TV, as well as a lot of film. In terms of transition, I’m not sure there has to be one as such. For me, I like my work to be diverse and varied, it’s what I admire most in acting and it’s what I aspire to be and do. That of course means a healthy balance of TV, Theatre and Film for someone like me. Last year I was in an American play at the Southwark Playhouse in London. I was playing a homosexual evangelical Christian from North West Florida in ‘Next Fall’ by Geoffrey Naughfts. The role couldn’t have been further from what I was doing as Tony, but I found something in that piece of theatre that was important to tell, and it was honour, as with this movie, to tell that story. You’re not doing a job like that for riches or fame. You’re doing it to test yourself, to strengthen your work and career. Not to mention reach an audience that you haven’t said hi to in a while.

Is it correct you started off your acting career on the West End Stage? If so that’s a pretty big way to start off your career, how did that happen?

I did start in the West End, yes. I actually did an open audition for ‘Oliver!’ which Sam Mendes was directing for the Palladium. I kept getting recalled for further auditions, which was both frightening and exciting. In the meantime, I also joined Sylvia Young’s agency for young actors. I ended up getting a role in a West End Musical version of ‘Peter Pan’. Alongside me in the cast was my cousin, actor Kevin Bishop, what a lovely way to start – we had such a good laugh together! I landed ‘Oliver!’ too and was going on to it as soon as I finished on Peter Pan. It felt like an incredible way into the industry at that young age. Coincidentally, ‘Peter Pan’ and ‘Oliver’ were also my first ever school productions, so it all felt quite serendipitous. Last year, Kev and I were both back on stage in separate productions, after a bit of a break from theatre. We were both in American plays about half a mile away from each other, in Southwark, exactly 20 years since I started acting with him by my side. Magical really. You had a role in the film Zero Dark Thirty which tells the story of the decade long hunt for the terrorist leader Osama Bin Laden, Can you tell us how hard it was filming this important story?

I did have a small role in that film, yes, playing an American National Security officer and assistant to Stephen Dillane’s character. It was an incredible film to be a part of. Filming it wasn’t hard as such, mainly because Kathryn Bigelow is simply awesome to work for. At the time, it was quite a secretive project, so that had its challenges. But there are no complaints turning up for work with Kathryn, playing scenes alongside the likes of Stephen and opposite Mark Strong. For me, it was just a pleasure to be part of something so intriguing.

You certainly like to keep yourself busy, which is always good for a working actor, you’re currently filming Bonded By Blood 2, Can you tell us what the film is about?

‘Bonded By Blood 2’ is a classic, in-your-face, British Gangster movie. It’s a true story set 5/6 years after the Essex Boys killings during the 90s. I play a guy called Malcolm Walsh in the film who is a violent, tough character. I’d never done anything like this in film, so it was fascinating doing research for the role. It’s got a great cast of guys like George Russo, Sam Strike and Josh Meyers, I think fans of the genre will truly love it!

You’re about to release your directorial debut Queens Mile, Why have you now decided to move behind the camera as a Director?

‘Queen’s Mile’ was a project that I shot last summer starring a wonderful actress, Emerald O’Hanrahan. Emerald is largely unknown to screen audiences, though she is a regular voice for BBC’s The Archers. I thought she was incredible in the piece and perfect casting for our film. She has a captivating screen presence and does fantastic in the role. Amrita Acharia from ‘Amar, Akbar & Tony’ is also in the short and just a delight, what an energy she has! I guess the time was just right at the moment really… My interest in film comes from a perspective of film as a whole. I’m fascinated with the entire process. I’ve always wanted to direct a short film and I felt like the urge was just too big to ignore anymore.

You’ve also been cast in a new Hollywood feature Now You See Me, The Second Act alongside Daniel Radcliffe. For any British actor to break Hollywood is always a major stepping stone, how did you land the part and how does it feel to be cast in the film?

It feels lovely! Being cast in a Hollywood movie of this size is a real privilege. Again, it’s a small role in this film but it’s a fun American role. Sadly I can’t reveal too much about it right now, but a true pleasure to be involved. Director Jon M. Chu is awesome and I think the movie will be incredible! As for getting the role, I owe a lot of thanks to Reg Perscoutt-Edgerton for getting me in the room. Are you single (don’t get it twisted I’m not asking for myself haha)?

I am single yes… Are you sure you’re not asking for yourself?

Who would be your ideal woman and why?

I’m kidding. I guess my ideal woman is someone smart and witty, beautiful inside and out with a career she’s passionate about. I’d like to take this opportunity to apologise in advance to my future wife, for all the times I’ll have been a gobshite.

Would you class yourself a romantic man or are you one of these 21st century men that have absolutely no idea how to treat a woman?

I’m definitely a 21st Century man in a lot of ways, but not when it comes to romance in the way you just mentioned. I like to think I am quite romantic yes, but I guess you’d have to check with my ex-girlfriends. Not a lot beats a slow kiss by the waterside. Romance should be unique to each person though, that’s what makes it romantic. I like writing poems. I can’t believe I just admitted that. Right- let’s stop talking now.

If you really wanted to impress a woman, what would you do to make it a perfect date?

Are you trying to get me to give away ALL my dating techniques in this one interview? To be honest, I don’t have any techniques, which is probably why I’m currently single! I guess a first date is always drinks somewhere nice, followed by dinner somewhere new, or unusual. I do love nice food. Clos Maggiore in Covent Garden is a personal favourite, it’s just so gorgeous and romantic, Wonderful classic food too. Although, my last date there was with my mum for Mother’s Day. Yep, I’ve become that guy.

Turn on’s: Wit, Passion, Coming to watch my film on the 17th of April.