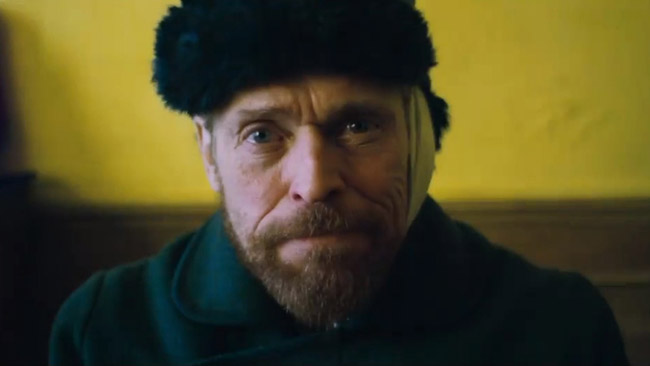 Dafoe is mesmerising as Van Gogh; Schnabel delivers some masterful strokes the emptiness can become quite deafening.

Vincent Van Gogh, an eccentric, bold and sensitive human being is the perfect subject for any film interpretation of his life. That’s why in the space of two years we’ve had not one but two films circling the twilight years of the artist. The latest from Julian Schnabel creates his piece of art with masterful strokes of Van Gogh’s obsession spiralling his soul into the mental sensitivity of genius.

Entering a period of mental frustration, whereas nothing more than painting is his life, Van Gogh, played with a fervent determination by William Dafoe, having settled in Paris, goes about his daily routines trying to make just a little cash from his paintings for he doesn’t know how to do anything else. Van Gogh is financially supported by his brother Theo (Rupert Friend) in order to keep a roof over his head and Alcohol on his table.

Lacking in wordy dialogue, scenes are randomly placed one after the other to unravel the state of Van Gogh’s deteriorating mind. We learn he lacks any social etiquette and constantly blanks out any wrongdoings. In one scene he is viciously bullied by a child who throws a rock at his head only to retaliate and is set upon by the locals, the victim becomes the target of a vendetta through blinkered eyes. In another scene whilst in the throes of painting, a group of rude students and their teacher encroach on his time only to mock his work which in turn invokes Van Gogh and his rage flares, but he becomes the bad guy yet again.

Van Gogh’s mental stability declines rapidly after his obsessive friendship with fellow artist Paul Gauguin (Oscar Isaac). Schnabel creates an intense relationship between the men begging the question was there a sexual frustration at any given point from Van Gogh? The intensity of the friendship eventually sees the men parting ways. To Van Gogh, this was a step too far for his fragile heart.

Schnabel posed with a brush in hand, flick’s through certain milestones of Van Gogh’s remaining years duplicating Van Gogh’s work as a showcase and depiction of how he could have well worked behind the canvas. Each scene is either dipped in the glaring yellowing sunflower or the grey of depression as Van Gogh wanders through fields or the urban streets carrying his paints and canvas on his back where ever he goes.

Dafoe is the blooming sunflower of the film, his face etched with pain and poverty, striking an uncanny resemblance to Van Gogh’s own famous self-portrait. An obsession of creativity can sometimes lead down a path of wilting wondering; although Schnabel delivers some masterful strokes the emptiness can become quite deafening.

At Eternity’s Gate is out in cinemas March 29th.