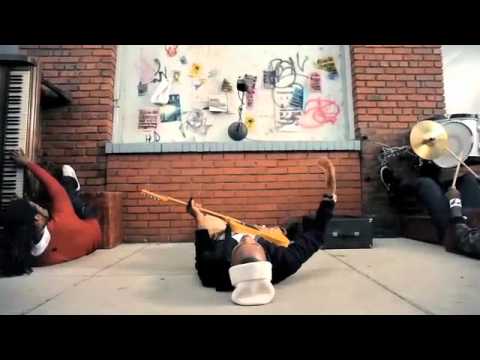 He has enough energy to power a big city during a summer blackout. Atlanta born rapper B.o.B (Bobby Ray Simmons Jr) rhymes in a way that pulls you in, makes your head spin, but still holds your attention with his forceful sounds.  It’s this energy that has made him the 13th male solo artist to have a debut album ‘B.o.B. Presents: The Adventures of Bobby Ray’, at  number one in its first week, as well as earning him a further two number one singles (‘Nothing On You’ and ‘Airplanes’). We caught up with B.o.B to find out about his top three beautiful girls, his thoughts on being compared to Andre 3000, and to take part in our game – ‘B.o.B’s Airplane Adventure’.

Okay, so lets start by talking a bit about you because since you first came on to the scene, a lot of people have tried slapping you with a label. So the big question is, are you a rapper, a rock star or a singer?
I will have to say I am a musician or an artist first. I believe for me my forte is music even in terms of visually my shows and the overall package of everything. I think that I approach it artistically so I am an artist first and a musician second.

So, tell us who is B.o.B?
B.o.B is a guy they call Bobby Ray, but for short they say Bob, and to spice it up they also say B.o.B. He’s basically travelled not too many light years from a distant planet but is now residing in Atlanta making music for the masses, and that is the most current update on B.oB.

As you mentioned your real name is of course Bobby Ray, but who exactly is he?
Bobby Ray, is B.o.B, it’s like for example when you say ‘who is Batman?’ Batman is of course Bruce Wayne, so it goes for Superman who is Clarke Kent, and B.o.B who is Bobby Ray… [Laughs] We’ve got to talk a bit about your music because it’s pretty clear that you’ve developed your own unique sound. So, was it hard trying to stand out from other artists?
Not really, for me I thought the hardest part was trying not to stand out while trying to make a song that would fit in to the category of popular songs. That was more the challenge but for me to be different I feel that’s just natural to me. So I just try to accept that inexplicable uniqueness that I can’t seem to escape.

Speaking of your sound, you’ve being compared specifically to the incredibly talented Andre 3000 (from OutKast). What is it do you think you may have in common?
I think we may have a lot in common although I’ve never met the guy, so there’s only so much I can really speak on. However, I feel that Outkast in general have really opened up the doorway for a lot for artists like myself regardless if the influence is there or not. I believe that Outkast along with many other artists from Atlanta have paved the way, so you’ve got to pay homage where it’s due.

Both your singles ‘Nothin On You’ and ‘Airplanes’ were both chart smashers across the pond. How are you coping with fame and the female attention?
Well, I feel that the female attention is never too much [Laughs]…. It’s never anything that I would have a problem with so I’m pretty much cool with everything. I just hope that as things continue to grow and grow I’ll be able to gain more and more fans. Tell us a bit about your brand new single ‘Don’t Let Me Fall’?
We shot the video in Colorado and had lot of fun. But basically it’s just me saying thank you to those who’ve supported me on my journey.

To celebrate the success of your debut album ‘The Adventures Of Bobby Ray’ which has been Certified Gold. We’ve put together a game called ‘B.o.B’s Airplane Adventure’- and all you’ve got to do is answer the following questions about your journey.

Your going to a far away planet which two things would you carry with you?
I would definitely need my Spaceship and my iPod.

There’s an extra seat for one more person, who would you also take along?
I will have to take my guitar.

On the way you bump in to Rihanna, Lady Gaga, Whoppi Goldberg and Nicki Minaj. Who would you snog, hug, avoid or invite on to your spaceship?
[Laughs]…I would invite all of them.

You’ve broken down while on your adventure, who would you call for help?
I would have to call Outkast because they are the ATLiens, and they have experience in space.

Returning from your adventure where would be the first place you would go?
I would have to stop by Jupiter, as I hear they’ve got some really dope trees over there. [Laughs]…

For more info check out www.bobatl.com