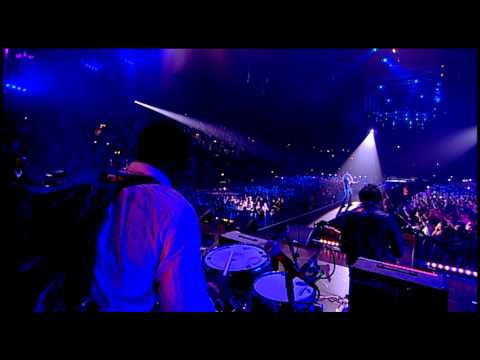 Some of the leading names in UK Urban music came together in full force last night (Sat 25th), for the third BBC Radio 1Xtra Live event at Wembley Arena.

The night was hosted by legendary Radio 1Xtra DJ Trevor Nelson and his breakfast show co-host Gemma – who kept it very Tyler-Perry-esq in a series of ‘interesting’ outfits and headwear.

Tinchy Stryder kicked things off with In My System and performed to a pumped up crowd, some of which had been waiting outside since morning to secure places at front of stage. In his now compulsory ‘Star in the Hood’ t-shirt and trademark sunglasses, Tinchy performed his biggest hits which saw surprise appearances from Dappy, Tinie Tempah and Devlin.

A host of various urban acts followed including Jamaican reggae singer Gyptian, Katy b, joined by Ms Dynamite, BOB, Labrinth and Devlin. There was also a surprise appearance by US rapper Cee-Lo, followed by Roll Deep and of course the show headliners N-Dubz.

The performance that stood out the most for me was Labrinth’s, who rose from the floor slowly in a puff of smoke in his trademark Trilby, trench coat and dickie bow ensemble, that only Labrinth could get away with.

Jason Derulo also gave a very good performance with energetic dance routines and good choreography. And when he took of his vest at the end of the performance, to reveal a much chiselled torso, I would say he easily achieved the biggest cheer/scream of the night.

For an opening act I think Tinchy strider did a very good job indeed. The guest appearances were a very nice touch and as small as he is, he definitely made a very big impact.

I found that a lot of the other acts were reliant solely on their music, completely forgetting any kind of visual aspect. Many artists wore very casual clothes and were joined on stage by just a DJ or a ‘hype man’ to enhance their performances. In a setting like Wembley Arena, I don’t think this is enough to keep the audience engaged. Looking at the audience reaction during these acts, I would say that they were in agreement, with the mostly teenage crowd, using this time to update their Facebook statuses or text their friends.

I think it would be fair to say that most of the crowd were N-Dubz fans, so they were obviously well received, but again, I didn’t see anything special about their performance visually and I think they were complacent in the fact that they have a large, very supportive fan base. On a positive note, I couldn’t help but to sing along to Na Na (Ft. Boy Better Know) and Tulisa’s ability to sing so well live never ceases to amaze me.

I think the highlight of the night and also the best performance of the evening would have to go to Tinie Tempah. Tinie came out on stage, with just a live band in the background and completely smashed it. Proving that good music, good energy and the most subtle special effects are all you need to not only entertain the crowd musically but also engage your audience visually.

All in all BBC Radio 1Xtra Live was an event to be proud of. It was refreshing to see such talent, mostly UK based, all come together in a setting like Wembley Arena. The cameo appearances on by different acts each others sets, showcased a warm sense of unity within the Urban music scene and even though some acts were slightly unpolished, it was nice to see these acts given a platform to perform and to engage with the supporters of their music.