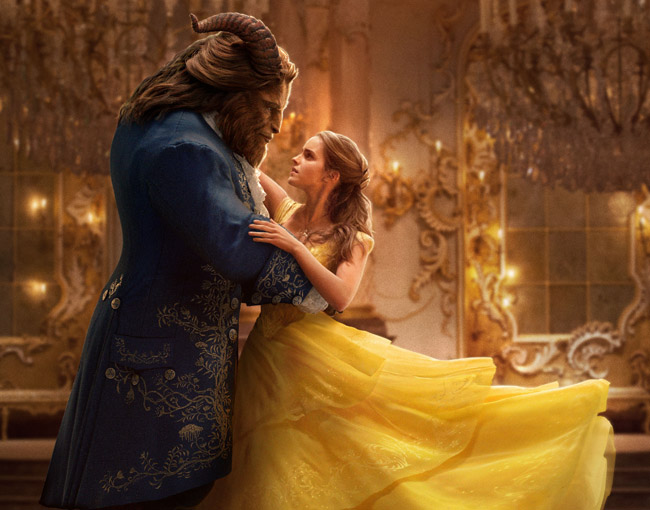 If there is one actress on this earth that has Disney princess screaming from her very being it’s Emma Watson, looking very much like the quintessential English rose with an enchanting demeanour and a 21st century twist there couldn’t be a better person to play Belle in Disney’s live-action Beauty and the Beast – even if her performance is less than spellbinding.

Vibrant pomp and prance is very much the order of the day as we commence with two opening sequences, one in which we witness an overbearingly vain and vile prince become victim to a witches curse and the other, with Belle in a fashion, as a means to go on with a song and dance number lead by little Miss Watson. Leading us on a merry dance of introduction’s to the campishly gay Le Fou (Josh Gad) as the downtrodden sidekick to the handsome yet ugly with vanity Gaston (Luke Evans), who makes it his aim in life to make Belle his wife, to Belle’s kind-hearted father (Kevin Kline). The musical numbers come loud – to the point of the orchestra actually drowning out the vocal arrangements – and extremely proud and whilst the newer songs are fitting of a Disney outing they are far from overly memorable.

Before we can blink, Belle’s father is locked up the Beast’s castle with a slightly modern Belle making her way to his rescue, sacrificing herself to take her father’s place. A far from mean or scary yet grumpy Beast, along with his animated household goods, set out to make Belle fall madly in love with the endearingly handsome beast before his time runs out and they are all locked in the enchanted curse forever more. It really isn’t hard to fall for this CGI beast, a beast that plays lord and protector with a mushy side that makes you want to hold out your arms and usher him in for a hug, but once beast transforms from beast to human in the form of Legion’s Dan Stevens, disappointment rises causing a longing for a return of the hairy buffalo protector, far from saying Stevens isn’t good he just isn’t around long enough to make that assumption. The audience falls for the beast, not his human counterpart.

The stand out human performance has to be at the hands of Gaston, otherwise known as the Welsh wonder Luke Evans. He encapsulates a Disney villain with humorous prowess – and let’s face it has the best vocal styling’s out of a mediocre singing cast. His trusty sidekick, Le Fou played by Josh Gad is a homely loyal fella, the character in which Disney thought could be thrust into our modern times with his sexuality. The moment Le Fou is confirmed as gay is fleeting but if you don’t pick that up before it’s unveiling your simply sleeping through the whole number.

Watson as Belle does a decent enough job and makes Belle her own, ladylike and modest but she doesn’t sparkle or bring out any kind of audience adulation for her character. It’s almost as if she’s just a supporting member of the cast as she fails to show any kind of emotion.

Even if this live-action Beauty and the Beasty has an enchanting allure that embraces an ending laced with a horde big named actors such as Ewan McGregor, Ian McKellen, Emma Thompson, Stanley Tucci and Gugu Mbatha-Raw there is a sense of an anti-climax as the end credits begin to role.

Beauty and the Beast is in cinemas March 17.