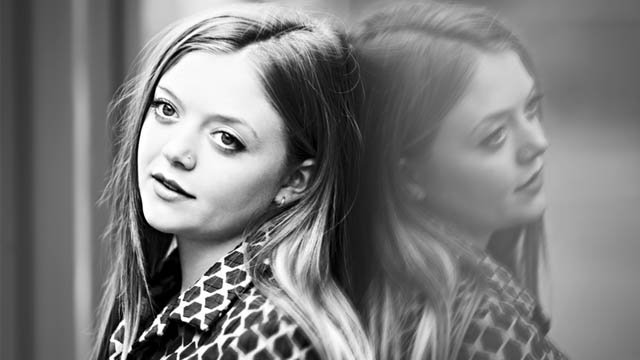 It’s not surprising that YouTube is getting more and more competitive by the day. It’s getting harder to get noticed but those that manage to cut through the clutter are doing so because they’re truly talented. Becky CJ is definitely one of those rare voices that instantly grips you and keeps you coming back for more.

Her first ever YouTube cover of “Lego House” that she posted in 2012 went viral with over 180,000 views and encouragement from Ed Sheeran himself. We caught up with the young singer/songwriter to talk a bit about her experiences with YouTube success, songwriting and the industry.

How long have you been doing music for?
I’ve come from a very musical family. My mum’s a singer and my dad’s a keyboard player, and they’ve both been in the industry for 35 years. I grew up kind of not knowing anything else, so in terms of singing I’m kind of that cliché person who’s been doing it forever. But writing my own stuff only really came about when I moved to uni; I spent a year away in Norwich and that’s when I first started writing my own songs.

In 2012 Ed Sheeran tweeted his support of your YouTube cover of “Lego House” and it went viral. Was that the first video to go viral?
That video was the first video I ever put on YouTube and the first video to have gone viral as such. It was crazy. It was one of those things where I knew that people had been doing it and I’d never been that interested cause I thought it was a really weird concept.

I think that’s why it happened to do so well, as well as timing and Ed’s backing of it really helped. Also cause he was so new he probably wasn’t as used to people covering his music so him and his producers were still looking at the covers that were being put on YouTube cause I got tweeted by Jake Gosling from sticky studios being like ‘Wow we checked out your cover and sent it to Ed’, and you kind of get the impression that now they wouldn’t do that.

What would you say are some of the essential ingredients for making a successful YouTube cover?
I’ve always found it hard to work the YouTube world and I never really know how much I want to put out cause I’m very protective of this idea that what I put up is good or of a quality that people can recognize.

I think that passion is the most important thing. Even if you put something up that isn’t 100 percent perfect but you’re passionate and real; people will respond better to that.

Then I guess it’s timing as well but that’s more strategic I suppose. I also have to remind myself that while views are obviously important it’s more about the consistency of the people coming to watch you and developing a kind of relationship with the people who are there all the time. Because even if you get a million hits those people aren’t going to watch you again necessarily.

You’re a songwriter as well and you’ve released two EP’s ‘My Teenage Love Story’ & ‘If This Is Love’. What inspired the songs on there?
I’ve always written songs about relationships even if they’re not necessarily about mine. And it’s something that I’ve tried to stop myself from doing but… (laughs) it’s hard not to. But yeah, at university I definitely found that those first years away from home and being on your own, the first thing you sort of end up focusing on are relationships. I had my ups and downs and decided to channel them into some kind of writing. Then with ‘If This Is Love’ I was in a long-term relationship, well a year and a half, when I was about 19 and it’s a bit weird cause I wouldn’t say that the songs are about anything directly in my life, it’s just that they inspire me in a certain way.

A lot of young singers struggle to find their own image and sound, do you feel like you’ve found yours?
That’s a really good question cause it’s something I struggle with a lot actually.

I feel like I’ve found my voice and my sound and I’m happy with the way I am and the EPs that I’ve released. But a lot of people, industry people, aren’t. They perhaps don’t think that I’m commercial enough. But you know, I don’t want to create an album of electronic music or an album of synthetic music. I want an album which is filled with instruments and people being creative, a really kind of feel good instrumental based album, not a dance album, but unfortunately the charts are completely dominated by that kind of music at the moment.

There’s also a lot of pressure from the media for young female artists to look and act a certain way, especially in the pop scene, how do you stay true to yourself and your music?
I suppose I just have this attitude of ‘well if I’m not like everyone else than at least that makes me unique’. I’m not denying that I’ve looked at pictures of for example Katy Perry and women with amazing figures, all dolled up, and I’ve gone woah it’d be insane to be like that. But those people are like that because of the position they’re in. Their whole life is their image. They wouldn’t look like that if they were living the life you’re leading. So there’s no point kind of gearing yourself up to become this perfect thing.

I’m quite a confident person. I’ve never really wanted to worry about it. Those fears of not being thin enough or looking good enough have always been overshadowed by my belief that it’s all okay. I know I’m not breaking mirrors when I look at them so it doesn’t matter.

You get a lot of feedback on a platform like YouTube, what’s the best feedback you’ve ever been given?
That’s really interesting, I’ve never really thought about it. It makes me really happy when people comment and say that they can see how much I really love music, which is a comment that comes up quite a lot for me. That’s really nice for me to hear cause it means people see that you’ve embodied this whole song and this means so much to you which makes me think that this person really watched and listened. But in terms of advice, no one’s ever really given me advice I don’t think. People are like ‘go on the X factor’ (laughs) like all the time. That’s not something I would consider though. I come from this world where everyone around me is involved with music and they’ve made it without that and it’s been down to a passion so it would just go against everything I’ve grown up believing in.

Are you working on any new material at the moment?
We’ve got plans for my third EP over the next couple of weeks and I’m going to be working with a few different producers and getting some different sounds. I’ve got a lot going on at the moment so I feel like I’ve got enough to write about, that’s for sure, and I’ve also got a couple of songs that I’m really excited about actually getting the chance to record and focusing on my original music.

Make sure you catch Becky at her upcoming gig on the 7th of April at The Underbelly in Islington!