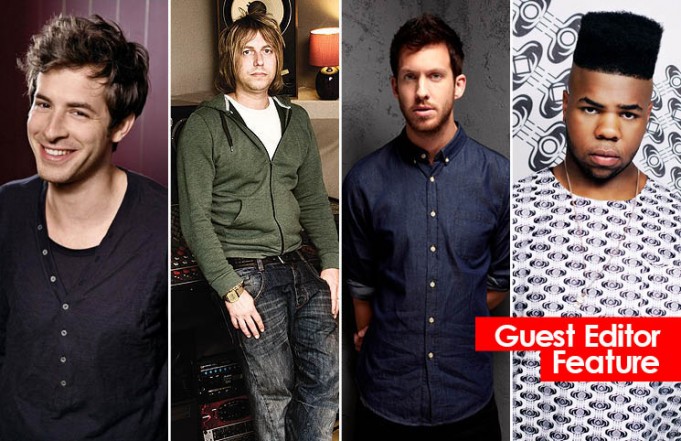 I think it is fair to say that lately Britain has produced some of the biggest music acts in the world with UK music taking over the charts like there is no tomorrow! Behind every talented music act though there is a just as talented music producer who is helping make these unforgettable acts come to life. Without super dope producers there would be no super dope music available for our listening. Here at Flavourmag we have decided to honour the best British super-producers in the game!

Artful Dodger is best known for their 2-step beats and garage classics from the late 90’s and early 2000’s. Artful Dodger is a two piece RnB/Garage band with Mark Hill as the original front man. Hill is a Welsh musician, songwriter and producer. He co-wrote Craig Davids multi platinum album “Born To Do It”. Since he began releasing music in 1997 he has achieved four Ivor Novello Awards, a number one album, two number one singles and over 10 million records sales worldwide….now thats impressive!

Mark Ronson is now a house hold name and in our opinion, rightly so! Ronson is an English musician, DJ, singer and music producer. This producer had a struggle at first with his first album failing to even chart, however his second album went on to include three top 10 hits and won him a Brit Award for Best British Male. Not only has Mark had success himsel as an artist he has also had success as a producer and is now a highly desireable man to work with. Having produced for the likes of the late Amy Whinehouse, Christina Aguilera, Robbie Williams, Macy Gray and many many more we don’t blame artists queing to work with this sick talent!

Calvin Harris is riding high right now and has blown the UK, the US and the rest of worlds charts apart this year (2014)! Harris is a Scottish singer, songwriter, record producer and DJ. Calvin Harris is currently the man on everyones lips right now. Having procuded and written hit after hit for the likes of Cheryl Cole, Rihanna, Dizzee Rascal, Example, ex girlfriend Rita Ora and many many more this talent is not one to sleep on. Having success as a writer and a producer for well know existing artists is one thing, some say an easy achievement, but to have huge global success for yourself as well is another! Calvin Harris we salute you!

Uzoechi Osisioma Emenike is professionally known as MNEK. MNEK is a Grammy-nominated British singer-songwriter and record producer from South East London. MNEK is fairly new to the music scene and only really started making a name for himself in 2012 when he feature on Rudimentals track “Spoons”. However behind the scenes MNEK has been very busy over the years and has wrote for acts such as Little Mix, Misha B, Duke Dumont, Kylie Minogue and the list could go on for ever. Not only does he write the tracks but he produces them as well, now that’s what you call talent! With a debut album due to drop soon we are sure MNEK is going to continue to make big waves across the music business!

Jake Gosling is a multi platinum selling music producer, songwriter, remixer, manager, and publisher. Jake is best known for his work with the biggest boyband in the world One Direction, Ed Sheeran, Wiley and many many more. Gosling started his dream career performing as a lead vocalist and keys player in numerous bands which helped him learn music production and modern recording techniques. Jake also has his own recording studio called Sticky Studios, in Surrey….very impressive! Having topped the charts all over the world we recommend that you pay very close attention to this guy and his talent. Why? Because he aint going no where just yet!

Stuart Price is best know for his work with Kylie Minogue, Take That, Madonna, Missy Elliott and other huge world wide stars. Price is a three time Grammy-winning British electronic musician, songwriter, and record producer. Price has produced and co-written numerous songs for popular artists. Not only has Price also remixed and re-produced numerous songs under his own name he has also produced under the names Thin White Duke, Jacques Lu Cont, and Les Rhythmes Digitales. We’re not quite sure why he has so many other names, maybe they are alter egos, but we kinda like it. It sets him apart from the rest which is extremely important in this business. Be a trend setter, not a follower!

William Orbit was a super cool producer during the 90’s having worked with Blur, All Saints and Madonna. His work with Madonna secured him three grammy awards. Not only has Orbit worked with the Queen of pop once, he as done it twice! He also took on Madonnas 2012 album “MDNA” and produced six successful songs for the record. William Orbit is an English musician, composer and record producer who started his successful music career in the early 1980’s. A career spanning over 30 years, now that’s a sick producer right there!

Richard X is also known by his full name Richard Phillips and is a British songwriter and music producer. X is known for his work with the likes of Rachel Stevens, Liberty X, Sugababes, Kelis and a ton more! Having worked with some of the biggest names in pop music Richard X falls more into the pop producing area. He once said that his original intention was to “reinvent” pop music by making records that are “deliberately unplayable”. Here at Flavourmag we haven’t really been able to grasp the meaning behind that but we are a sucker for a good cheesy pop track so we praise him anyway!

Xenomania is a British songwriting and production team founded by Brian Higgins and are based in Kent. Xenomania formed after Brian met Miranda Cooper. They have written and produced for some incrediable talent including Cher, Pet Shop Boys, Girls Aloud and loads more! There are wide influences present in their productions, including electronic, glam rock , Motown soul, punk, and more traditional pop music. With influences that wide Xenomania are to be around for a long time creating uber cool beats and tracks! Not only are they writters and producers but they are now record label owners. They created Xenomania Records in 2008!

Disclosure are an electric dance duo made up of two brothers from Surrey. The brothers smashed into the music scene in June 2013 when they released their Grammy-nominated debut album “Settle”. The album was a huge success and went to the top of the charts all across the globe. With success comes respect and respect has opened doors for the two lads. Already having worked with huge UK acts such as Sam Smith, Eliza Doolittle and Alungeorge they have now added the likes of Usher and Mary J Blige to the list. The lads are currently working very closely with and producing for Blige’s upcoming album “London Sessions”. Disclosure have already won Best Producer 2013 and we are sure their are many more awards to come for these talented super cool brothers. All this under their belts already aint too shaby for two ordinary blokes from the UK aye!

So there you have it! From old school garage producers to classic pop producers to rising, up and coming new producers all from the UK! The UK music scene is a force to be reckoned with and is only getting stronger and stronger by the minute. Here at Flavourmag we cant wait to see/hear the work from the new generation of producers which we are sure is coming really soon. With that said, the old school and well respected producers are still causing excitement with their still relevant sick skills!

What are your thoughts? Let us know below and remember to follow @Flavourmag on Twitter for more updates!