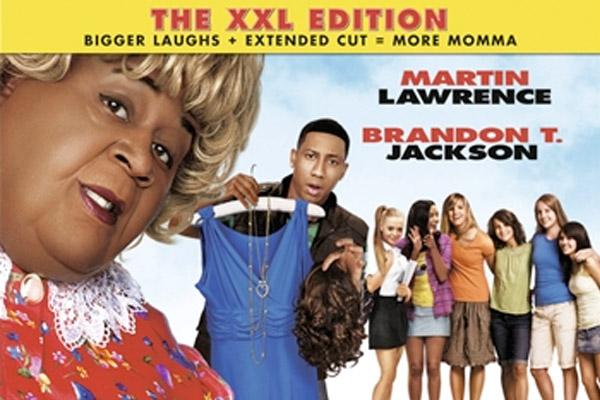 To celebrate the release of Big Mommas: Like Father, Like Son on DVD and Blu-ray this Monday,

we are giving you the chance to win the opportunity to learn to dance like Big Momma with a lesson for you and three friends at Pineapple Dance Studios! You and three runners up will also win a copy of Big Mommas: Like Father, Like Son on DVD.

Everybody’s favourite Big Momma is back and this time there are double the laughs! MARTIN LAWRENCE returns as FBI agent Malcolm Turner who must once again don the fat suit and go undercover as his alter-ego, with hilarious consequences. Joined by fellow stand-up comic and hip-hop sensation BRANDON T. JACKSON, the action and mishaps come thick and fast when BIG MOMMAS: LIKE FATHER, LIKE SON is released on DVD, Blu-ray and with the first two films in The Big Momma Triple Pack DVD Box Set from Twentieth Century Fox Home Entertainment on 18 July 2011.

After Malcolm’s (Lawrence; Big Momma’s 1 & 2, Bad Boys) step-son Trent (Jackson; Percy Jackson, Tropic Thunder) witnesses a murder, the two must pull out all the stops to protect Trent’s identity and catch the killer, before the killer catches them! The gloves come off and the fat suits go on as Malcolm and Trent head under-cover at an all-girl performing art school disguised as the infamous Big Momma and her hefty side-kick Charmaine. Combining their detective skills with classic comedy, hot music and new dance sensation – The Cleveland Shuffle, Big Momma and Charmaine will stop at nothing to prevent from blowing their cover and catching the bad guys.

Staring two of comedy’s favourite laugh-out-loud actors and with the anticipated return of Big Momma in all her glory, BIG MOMMAS: LIKE FATHER, LIKE SON is guaranteed to have you howling with laughter when it’s released on DVD, Blu-ray and Big Momma Triple Pack DVD Box Set on 18 July 2011.

To be in with a chance of winning a dance lesson for you and three friends at Pineapple Dance Studios and a copy of Big Mommas: Like Father, Like Son on DVD, just answer this simple question:

Simply email your answer, your name and mobile number to comps@flavourmag.co.uk and and be sure to writer BIG MOMMA in the subject header.