Who would of thought even soon-to-be princess’s are into buying off the rack! It’s a Buckingham Palace versus Hollywood face off.

Despite the royal competition Kerry Washington hold’s her own in this cream-coloured, embellished Temperley London dress. She pairs it with bare legs, black peep-toe pumps and matching clutch at the Clinton Foundation’s Millennium Network Event in L.A back in 2009.

Kate Middleton stepped out in the same frock more than a year later while attending the Teenager Cancer Trust event in England. She accessorized with black tights, blazer and that enormous engagement ring from her gorgeous finance Prince William. It’s the cougar versus the hot hip hop honey. Demi Moore and Ciara both step out in identical Balmain dresses that are heavy on the stitching but short on hems.

Ciara certainly shows off her ‘goodies’ in this gold embroidered mini with matching metallic arm fringe to the BET Awards back in June 2010. She accessorizes with a wide grommet belt and stilettos boots.

While Demi went for a slightly more understated look at the GQ’s Gentleman’s Ball last month, dropping the arm embellishments and accessorizing her outfit with a skinny belt and black pumps. There is no doubt in our minds that this single shouldered Issa dress is gorgeous but we do question, with curves or without?

Ashanti wore the dress back in November 2010 at the Princess Grace Awards Gala in New York City with her hair piled up high and stacks of ring bling on her fingers.

Katy Perry wore the graphic print dress to the 2nd Annual Change Begins Within benefit in NYC at month later, styling her version with minimalistic accessories and loose locks. As surprised as we are to actually see Paris Hilton ditch her usual panties, push up bra’s and princess sparkles for this more refined look were having trouble determining whether or not she’s got it in the bag.

The hotel heiress recently graced the 2010 Victoria Secret Fashion Show in a fairly conservative Louis Vuitton print dress styled with black tights, pumps and a patterned clutch. Zoe Saldana wore the dress to the Amfar Gala back in February with bare legs, open toe embellished boots and a metallic bag. Mendes opted for a loose fitted version of the metallic mini to the MTV Movie Awards earlier this year and paired it with gold Roger Vivier sandals. Angelina Jolie looked smoking hot in this Versace number for The Changeling Premiere. She showed off her tattoos in honour of her children Viv and Knox.

While on the other end of the style spectrum there was Mariah Carey AKA Ms Mimi who got the same dress shortened only to pair it with black tights! Why? Then finished off her look with black peep toes, which clearly weren’t chosen by a qualified stylist to say the least! 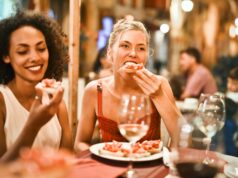