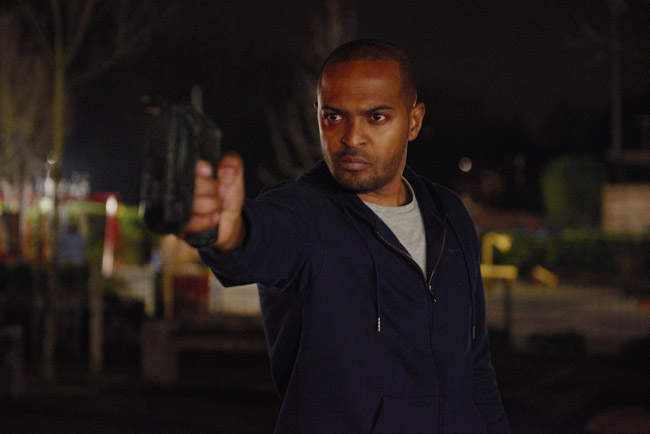 Noel Clarke’s Brotherhood is being dubbed as the first British trilogy, the third and final film in the Hood series of films, Kidulthood and Adulthood. A film that has been 10 years in the making which see’s the film evolve into more of a gangster genre film than an actual Hood movie, proving the script has come of age alongside its actors as well as staying faithful to its roots.

Back in 2006, all Britain had in the mold of a British crime drama was the likes of Lock, Stock and two Smoking Barrels and the like, then along came Kidulthood bringing a more contemporary urban experience of the London we know today. Clarke has been the face of the Hood series of films from the very beginning but he never intended to make three films out of the story of Sam, in fact, the story was never supposed to go further than Kidulthood. Brotherhood sees’s him not only in the role as the male lead with a return to his character, Sam Peel, but screenwriter, director, and producer. We are lavished with flashbacks to give us a little reminder of what went before but Sam Peel (Clarke) is now a grown man. He has left prison after he was convicted of the murder of Trife and is settling down to a quiet life with his partner Kayla (Shanika Warren-Markland) and their young child, putting his troubled street life behind him for good, or so he thinks. It quickly unravels that Sam’s past is rapidly catching up with him when Uncle Curtis (Cornell John) is seeking revenge for his Nephew’s death. Whilst everyone has evolved around him Sam, at times, is still stuck in the past and is just a little out of his depth.

The streets of West London are full of new faces to be reckoned with, Mean and Moody (and rather handsome) killer Melvin ‘Hugs’ Levin – played by We Are Monster’s Leeshon Alexander – is a force to be reckoned with, named as Hugs for his sadistic way of killing his victims. Basically, if he goes in for a hug you know you’re a dead man. Leeshon doesn’t quite give us his epically evil performance he perfected so well in We are Monster, however even if he doesn’t raise a smile there is something rather comical about his character. Joining Hugs is Daley (Jason Maza) and their posse of henchmen which include none other than Stormzy – who, when faced with any real danger, does a runner. With a price on his head, Sam is sucked into the web by a random, sexy, young women who seduces him, well men aren’t that clever when it comes to getting their end away. As Sam tries to settle the score amicable, he brings in his old friend Henry (Arnold Oceng), who is now happily settled down with a life that’s just plodding along. Oceng is no doubt the stand out in the whole film, it seems Clarke favoured him with all the best comedic lines and he delivers them with fine precision. He provides the light relief when situations become heavy – raising the quality of the script. With the death of a beloved family member, who is brutally thrown over a balcony, Sam has no choice but to revert to street thug to end this feud once and for all – with the aid of the police.

Clarke has a chance to flex his acting muscles, showing his emotional side, connecting his character with the audience. The prevailing theme throughout is the message of how everyone, and society changes and we all have to adapt as we grow older and our world changes. Could this be yet another hit for Clarke as he brings the real street life of London to the big screen yet again? Well, if you ain’t a real Londoner you just might not get the relevance.

Brotherhood is out in cinemas August 29.