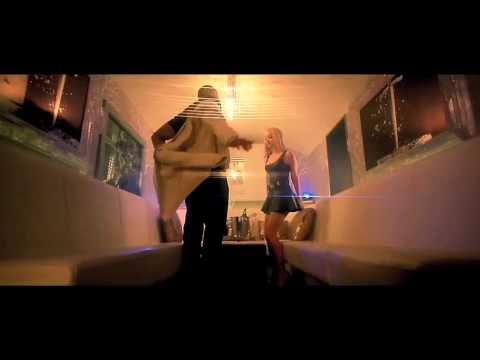 The buzzer rings, I hear arguing, and as they appear Dappy pipes ‘Na Na Nai!’ excitedly as we greet. I smile and instantly acknowledge that there are definitely no gimmicks here! As we all take a seat, Dappy is eager to let me know what has been going on. “Me, Tulisa and Fazer, we’re tired as hell. We just officially finished the second N-Dubz album. The Uncle B album we released, done double platinum – half a million sales – now it’s all about the second album. We’ve just finished it now, it’s called Against All Odds.” You must be pleased… “Album of the year!” Fazer adds. “And we’ve got the new single I Need You,” Tulisa says proudly. Things are hectic for the trio with all the festivals, shows and regular TV appearances (including Never Mind The Buzzcocks), Fazer laughs: “The only moment I get time to myself is when I’m in the toilet!”

Then and now
Although, success is within their grasp now, things weren’t always so easy. “Sometimes it used to be like, forget this music thing, what am I going to be clean cut for? But it is definitely all thanks to Uncle B, he kept us on this path,” says Fazer.
Now they are signed to All Around The World records, but Tulisa is quick to remind me of their struggle to make it. “We never got a proper deal until the Uncle B album, it was all independent. We would send out promo packages, CDs, the works, waiting for a call that didn’t come, so we decided to do it all ourselves, the videos on Channel U, the records – and then the labels came running.” So you started the buzz yourselves?
“We aren’t going to candy-coat nothing,” says Dappy. “We were naughty, we bunked off school and went to the studio and took Tulisa out of school to come to the studio!” Hang on. “Erm no, I took myself out!” Tulisa corrects before Dappy starts again. “But like Fazer said, we’ve come a long way and if it wasn’t for Uncle B and its success, we would be dead or in jail – straight up!”
Papa Can You Hear Me? from your first album was such a personal song and it was a huge success… “Yeah, I cried tears in the booth while I was recording it,” Fazer says. It was given such a great reception, how did that feel? “It definitely felt great,” Fazer continues, “especially when the crowd shouts it back. It’s a track anyone who has lost someone can relate to by replacing ‘Papa’ with the name of their loved one. It felt amazing getting a good reception, for real.” 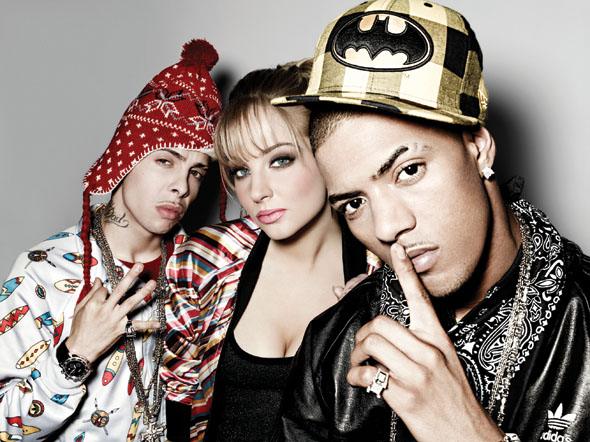 Cameos and collaborations
Against All Odds is the second album from the trio and features many star cameos. “We’ve N-Dubz featuring Wiley, Mr Hudson, Chipmunk and we also wrote a track for Gary Barlow!” exclaims Dappy. From working with a member of Take That to Tinchy Stryder, the Camden-based trio have certainly come a long way since their first single three years ago. Can you believe that their chart-topping hit with Tinchy Stryder was created in under an hour? “I went in there, heard what he wanted, so I came up with Number One,” Dappy recalls. “I structured the song, then Tinchy wrote his raps. It was great, we did that in 45 minutes to an hour!”
Number One, Ouch and Wouldn’t You, are just a few N-Dubz bangers to mention! Creating hits appears to come naturally to them. Fazer enthuses: “Give us a day and a half we’ll make a big track!” For real?
“It’s not a solo project,” Dappy explains. “I have to make sure before the record is finished that all three of our voices match up. It has to be at one level and that’s why all three of us are worth a lot of money. For example, Leona Lewis is one of the best singers around, but she has it all done for her. To make her record into a hit she has about 15 people doing it, one doing her vocal engineering, one on mixing, one doing mastering. Us three – we do that all ourselves! That’s why N-Dubz won Best UK act and Best Album at the MOBOs!”

Public acclaim
Was that a big deal to you? “To win Best Album and Best UK act, that’s a great feeling because you know it’s not fixed; it’s the public that’s voting. There were so many artists in that category – about seven of them including Mr Hudson, Kanye and Tinchy – and to know that we won the Best Album award and that we are the best act of this year, it’s just amazing!” says Dappy excitedly. What future goals are important to you? “I want to be a millionaire! To provide a nest for my family,” Tulisa says. “Yeah definitely,” Dappy nods as he continues: “I want to provide a nest for my mum and my son and I would love to make my neighbourhood a better place and buy my own block.” As we all laugh, Tulisa reminds me of what makes N-Dubz so unique and the secret of their successful chemistry. “We’re all just so different!”

N-Dubz single I Need You and the album Against All Odds are both out now; www.ndubz.com