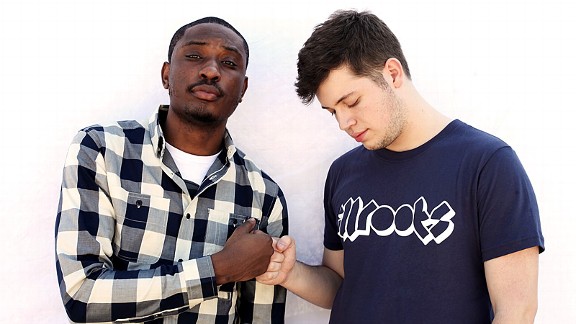 It’s been a phenomenal year for Chiddy Bang. Their debut single ‘Opposite Of Adults’, entered the UK charts at number 12 and remained in the top 20 for over five weeks selling nearly 100,000 copies.

The American Electronic/Hip Hop duo which consist of rapper Chidera “Chiddy” Anamege, and producer Noah “Xaphoon Jones” have certainly gone from being just college kids to making a name for themselves in the hip-hop world. Their merging of commercial samples and their distinctive style of rap has now seen them ending 2010, with the release of their brand new EP ‘Chiddy Bang: The Preview’. We caught up with Chiddy, one half of Chiddy Bang for a chat about working with Pharrell Williams and supporting Tinie Tempah on his UK tour.

First of all, can you tell us how the name Chiddy Bang came about?
It’s a name that I created when I was younger. I’ve been called Chiddy Bang ever since I was a very young kid, and it’s always been a name for my musical projects that I did back in the days. To be precise it actually started it off as a label which I ran called ‘Chiddy Bang Entertainment’, and when I met Noah, and started working with him we took the name and kept it running. When you guys met in college did you ever think that you would go on to achieve so much success in the States and the UK?
No, I ain’t even going to lie I never thought we would have captured the attention of people over here in the UK, but it’s definitely been a whirlwind roller-coaster ride. Right now we’re just doing what we’re doing everyday and just grinding.

Have you always been in to music?
I’ve been rapping, spitting and freestyling since I was about 10 or 12 years old. I grew up in New Jersey where hip hop and rap is everyone’s favourite past time, so if you were a kid growing up then you would most likely rap or know someone who does.

You’re currently supporting Tinie Tempah on his UK tour, what’s been your highlight so far?
Probably in Edinburgh, where I performed with Tinie who bought me out on stage during his set to freestyle on ‘Hello Good Morning’, and then he performed ‘Miami To Ibiza’ where I just ran out on stage jumping.

You guys have been compared music wise to Kid Cudi, what is it do you think you might have in common?
I think people give us the comparison because of the things that we choose to sample. We also have a sort of a quirky indie sound to some of the things that we choose to do, for example Noah, samples a beat and he brings it to me and I choose whichever of his beat I feel the most. And from there on we just start making it happen.

Let’s talk a bit about your recent success with ‘Opposite of Adults’, which received a huge amount of love here in the UK, did you at all anticipate that it would have got so popular?
I didn’t even anticipate that it would have got so big. It was a situation where we was at the right place at the right time, we’re definitely thankful for our label Parlophone records for reaching out, and putting us in the position in being able to release the song.

You recently released your brand new eight-track EP, Chiddy Bang: The Preview, which features appearances by Q-Tip and Pharrell Williams. What was it like working them?
It was amazing. I mean Pharrell, is dope to work with in the studio we went to LA and first thing Pharrell said was ‘Hey, what’s up my name is a Pharrell’, we were just like wow should we do anything right now. But it’s definitely good to work with the veterans in the game and people that have laid the ground work for the past decade. He was also one of those dudes that we look up to, and the Q-Tip situation came when we got a phone call from him saying he wanted to work with us. The Preview is of course a taste of what’s to come on ‘The Swelly Life’ your debut album, which is set to drop in 2011. What more can we expect?
Just expect a lot of dope music and us to be really, really on it. I mean we’re dropping another mixtape soon called ‘Peanut Butter and Swelly’ which is going to be dope.

Okay, so recently you were nominated for ‘Rookie of the Year’ at the BET Awards (Black Entertainment Awards), which sadly you missed out on due to Nicky Minaj, who dominated the night, were you at all disappointed that you didn’t win?
To be fair we did feel that we were going to loose. BET only supported our video to somewhat but MTV gave us a lot more support. We rarely got rotation on BET, and Nicky Minaj owns the damn thing [laughs]… so I figured she would have rapped it up.

As a fellow hip hop rapper what do you think of the hype surrounding Nicky Minaj? Are you a fan?
I’m a fan because if you look at it there’s been a void in female rap for the past how long. So it’s almost like she comes along spitting and its unreal especially her talent which you don’t want to cheer on. It’s like Lebron he is so good at basketball but he has so many haters.

So, would you agree that Nicky Minaj is a bit like a marmite?
Yeah, your either going to love her or hate her.

To round of the interview we would like to find out a bit more about you, so what we’ve done is we’ve put together a few random questions for you to answer as honestly as you can in ‘Flavour’s random Generator’.

If you were a drink, what would you be?
Sprite – refreshing to the game.

If the whole world was listening to you right now, what would you say?
Keep world peace and stop hunger.

Have you ever had an imaginary friend?
[Laughs]…Yes, probably when I was 3 years old he’s name was Herbert.

If you could marry a cartoon character who would it be?
Babs Bunny.

‘Chiddy Bang: The Preview’ is now out, and will be followed by their debut album The Swelly Life, which is set to drop in 2011.