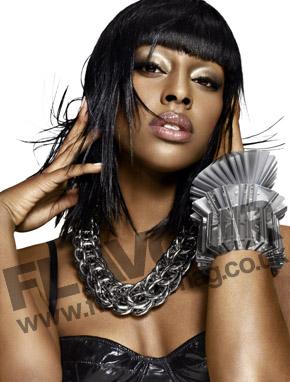 Phenomenal is one word. Fun is another. ‘More versatile’ than Leona Lewis was Simon Cowell’s words about her. While Cheryl Cole described her as ‘an excited bunny rabbit’, when talking about her forthcoming album Overcome. All of the above has been applied to the 2008 X-Factor winner Alexandra Burke. The 21-year-old singer who in under a year has created UK chart history by having the best selling hit by a female artist for her debut single Hallelujah and is the current European record holder for the fastest selling single over 24 hours and has been nominated for a Brit and Mobo Award.

Still a North London girl
As I walk into the meeting room of her record label Syco, Alex, as she likes to be called, greets me with a big smile and a hug like we are old friends meeting up after a long time apart. Having watched her for months as she captivated the hearts of the British public, with her powerful voice and killer dance moves on the ITV1 talent show accompanied by the vast amount of articles written about the singer and her family in the tabloids, I kind of felt like I knew her and this was my opportunity to get reacquainted and hear the truth about the X-Factor, her family and Cheryl Cole in her own words. Eager to talk about her experience an excited Alex begins:  ‘It’s been amazing,’ she says enthusiastically widening her eyes as if she is still in disbelief. ‘I’m living in a different world at the moment and everyday I wake up with a smile on my face.’ It was well noted during the series that she lived at home with her mother, former Soul II Soul singer Melissa Bell, sharing a cramped bedroom with her sister. After the series completed the singer moved to a one bedroom flat around the corner after being constantly besieged by fans. Now, she has recently moved again. ‘The little boys in my area…throw stuff on my car and are getting a bit annoying so to speak,’ she says. ‘It’s not cool so I’m had to move again which is unfortunate because I want to be close to my mum and I’m going to be alone but I’ve told my mum, ‘You best keep my bed fresh! Cos I’m going to be there a lot! I can’t be away from my family for too long. I love them too much.’ Since her magnificent win on the TV show and the X-Factor tour finished the starlet has been away from her family a lot, travelling the world working with producers like Red One (Lady GaGa) and Grammy-award winning Norwegian and songwriting team Stargate (Beyonce), and collaborating with Neyo and Taio Cruz on tracks for her debut album. The first single taken from the album is aptly titled Bad Boys. ‘Its feisty, it’s in your face,’ says the singer about the song, giggling as she continues, ‘and do you realise I always go for the bad boys!’ (Having said that, she admits she’s not dating anyone let alone a bad boy at the moment.)

Produced by rising hitmakers The Phantom Boyz, Alex sings over a catchy, sci-fi disco beat and US rapper Flo Rida also features on the track. ‘I met up with him and he’s a really sweet guy,’ she says recalling that moment when they met. ‘He laid down the vocals and I heard the tune and I was blown away. He gives it something.  I liked it before but Jesus Christ! I love it now! He gave it a new edge and I just feel blessed that he’s on it.’

Flo Rida is great, but is Beyonce or Cheryl Cole on your album? That’s what I want to know. Laughing she says: ‘I can’t confirm anything yet, I’m hoping to be on the European leg of her [Beyonce’s] tour.’ We all remember the amazing performance of the Dreamgirls track Listen that Alex sang with Beyonce in the X-Factor finals and I vividly recall Alex’s non-stop tears. She admits that she cried again when Beyonce came to visit her in the studio in New York. ‘I remember singing and opening my eyes and my girl was standing there and I actually couldn’t sing anymore!  I went to cuddle her and cried. She said ‘you can’t cry we are friends now’ and I cried some more!  I was like you can’t tell me things like that! You’re Beyonce! I also met her backstage at the O2 when she was here on tour and she wanted to meet my mama! She’s just such a lovely woman and I’m working with all her people.’

On Cheryl
And what about Cheryl? ‘Well, she is busy with the X-Factor at the moment but she’s always calling and texting me to make sure I’m alright. She’s a great support and a great friend and she’s still my mentor in a way because everytime I’ve got a problem, I’m ringing her and she’s the one that advises me on things to do.’

With fame comes a lot of pressure so with that said I wondered what’s the best piece of advice the Girls Aloud star had ever given her protégée? Alex pauses for a moment as she thinks before commenting: ‘I don’t buy papers or magazines anymore,’ she states. ‘That was Cheryl’s advice to me and I’ve stuck by it. Now I can never believe what I read about anyone else because a lot of lies have been written about me. Cheryl lives by that as well.’

Alex is naturally charismatic and speaks really fast, without taking a breath at times when she’s telling a story. Everything she says appears to be honest, as it just rolls off her tongue without thought. And it’s this very enduring quality about her that helped her romp to victory in a blaze of glory in the fifth series of The X-Factor, watched by 13 million viewers.

X-Rated
This year the show has been given something of a revamp, with the auditions now taking place in front of an audience of around 2,000 people at arenas across the country.

The pre-recorded audition stages of the show, sometimes felt lacklustre so they have taken an element out of the success of Britain’s Got Talent and which has given the show more energy. ‘I am nervous for them,’ says Alex about the new contestants but she does also offer some good advice: ‘you need to be yourself from the beginning and not hide anything. It doesn’t matter what you’re ashamed of, it doesn’t matter about your past because a lot of stuff gets dug out when you’re in the final twelve. You’ve just got to go with the flow and just live it.’

Dream Come True
The last 10 months have been a whirlwind for Alex, but one that is not set to end for a long time coming. Even she can’t believe it, ‘Its crazy isn’t it,’ she says as she contemplates her journey so far. ‘I’m a girl who gigged in pubs with bands and at weddings. I’ve lived in north London on Caledonian Road opposite Pentonville Prison with my mum all my life so to come from me living there and to come into this big dream that I’ve chased all my life. Now I’ve got it, I honestly have to pinch myself because I can’t believe I have everything that I’ve ever dreamt of.’