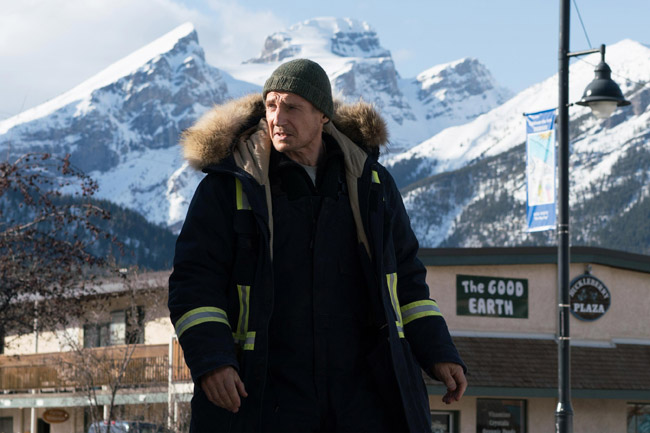 Overacted and at times and patronising in it’s over explanation of its own jokes teeters on the edge of its enjoyability for the popcorn munchers.

So much for Liam Neeson retiring from his bread and butter action film, the foot in mouth actor returns to the fold in a remake of the black comedy, In Order of Disappearance.  It’s kept its tone with the same director, but Hans Petter Moland takes a darkly comedic twist on the revenge thriller and scraps its pieces together for popcorn entertainment and not much else.

Neeson plays Nels Coxman, a snow plough operative and a stand-up pillar of a snowy Colorado community, and just to bang that part home we open with Nels receiving an award for citizen of the year – they may want to take that back after his disastrous confession in a recent interview. With tongue in cheek, that message about the man is short lived after his son is murdered by the local drug kingpin as he embarks on his own gruesome mission of revenge and retribution.

In paint-by-numbers simplicity the craft of filmmaking has taken a snow dive in a haphazard fashion, piecing together scene after scene with not much synchronicity. Moland can be forgiven for his basic script by covering up its shortcomings with pace action sequences as Nel’s killing spree comes thick and fast as he relentlessly makes his way through the quirky henchmen of the crime boss/local businessman played by Tom Bateman.

The beauty of the laughter comes from the excessively left of centre character’s that give this picture its edge of entertainment. From Nel’s ex-criminal brother who lives on the other side of the spectrum of Nel to the closeted henchmen having their own secret rendezvous behind the bosses back. Circling back round to the greasy crime boss who overprotects his own son, taking the fun out of his own childhood but who is as smart as any of the adults in the room and his feisty ex. All that’s missing at times is the cheeky wink to the camera which you can’t help but wonder if it’s going to show up after the next snow dune.

There is a fine line when it comes to the saying “it’s so bad it’s good”; could we be looking at this year’s The Meg in where it makes no qualms in sending itself up? Overacted and at times patronising in it’s over explanation of its own jokes teeters on the edge of threatening its enjoy-ability factor but Neeson soon turns that around with a new and creative cat and mouse murder mission. This isn’t no classic but its pure entertainment for the popcorn munchers.

Cold Pursuit is out in cinemas February 22nd.