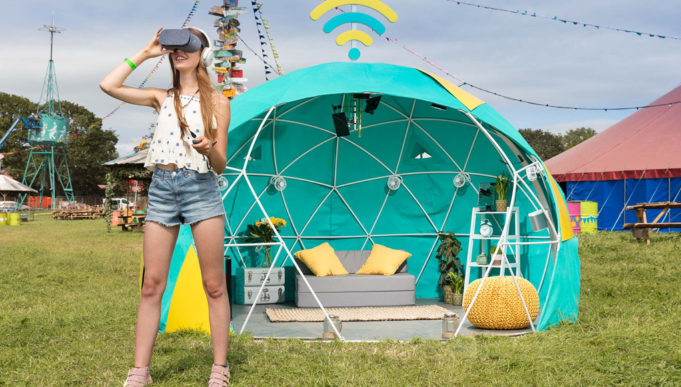 EE, Glastonbury Festival’s official technology and communications partner, has created the world’s first 4G-connected smart tent which will be pitched on site at the festival next week.

The 4GEE Smart Tent is an innovative connected camping experience, inspired by Smart Home technology and suggestions from festival fans on what would enhance their festival camping experience. Special features include bespoke mini fridge that tweets when stocks are running low, an entertainment centre that will show the BBC’s live streams of six stages from across the festival alongside exclusive Virtual Reality content captured on site and a voice-activated party setting to create the perfect late-night atmosphere.

In addition to this, EE is also offering one lucky Glastonbury-goer the ultimate connected camping experience for a one night stay in the 4GEE Smart Tent during the festival. New research from EE revealed that a fully stocked fridge with unlimited drink is the most desired item by festival-goers to complete their ultimate festival camping experience, 47 per cent of those surveyed chose this as their number one camping accessory.  A comfy bed was close second with 44 per cent of the votes and a superfast internet connection – chosen by 29 per cent of festival-goers – wasn’t far behind in third place.

In response to the research and using the latest connected home technology the innovative 4GEE Smart Tent will feature: One lucky Glastonbury-goer will win the opportunity for themselves and a friend to stay in the 4GEE Smart Tent on Friday 23 June. The winner and their chosen guest will not only be treated to one night’s stay in the bespoke tent, but will also be escorted to the Pyramid Stage to watch one of the performances from the side of the stage. They will also receive a brand new Pixel, Phone by Google each and be served breakfast in bed on Saturday morning making sure they head off fully-fuelled for another day of Glastonbury Festival fun.

Go to ee.co.uk/Glastonbury for more info