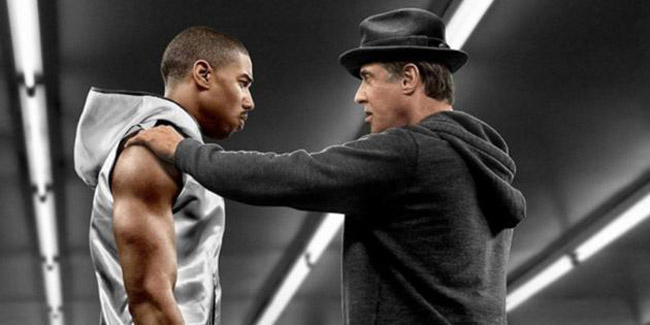 With Ryan Coogler missing from returning to directing duties as he took time to travel to Black Panther’s Wakanda. The follow up to 2015’s re-emergence into the world of Rocky and Apollo Creed’s son, Adonis, took on a new director in Steven Caple Jr for a valiant bout of brute, heart and family ties that doesn’t quite get in that knockout punch. It was never going to be easy for Caple Jr to follow in Coogler’s footsteps; transforming Stallone’s carbon copy of Rocky IV with a few minor twists and adjustments was always going to be a mountain to climb.

The chiselled Adonis (Michael B. Jordan) returns this time with a few major wins under his belt, now world champion, shacked up with musician girlfriend Bianca (Tessa Thompson) his world is about to change, not with just the prospect of being a father but with a challenge from the son of Ivan Drago (Dolph Lundgren), the man who killed his father in the ring in Rocky IV.  It couldn’t be any more predictable as we are dealt with a paint by numbers Rocky film. There is no second-guessing the plot as Adonis clashes with his trainer, Sylvester Stallone’s Rocky, over this revenge match.

Fans of the franchise will be delighted with this nostalgia trip, but if you cast your mind back to Rocky III you’ll realise the plot is just being sliced up from previous Rocky movies and regurgitated including the staple training montage. As Rocky hit the height of his career in the third instalment, it emerged his beloved trainer, Mickey played by Burgess Meredith, had been hand picking his opponents to keep him and his title safe. This time around the pundits, again, suspect the same thing of Creed Jnr.  Where Mickey abandoned Rocky then, the story has come full circle with Rocky abandoning Creed as he becomes hell-bent on revenge for his own Father no matter the consequences.

The core theme centres on parental relationships, adding to the nuance of the story; this is where the drama unfolds and could have been expanded to give this depth and the much-needed stamp to differentiate from the Rocky films. With Rocky like a surrogate Father to Adonis, we skim the tension between the pair as their relationship is tested. Adonis also has to deal with his deep-seated issues of his own loss of the Father he never knew. Rocky has his own issues with his son, the son he hasn’t seen since Rocky Balboa which is accompanied by the subplot that Viktor Drago (Florian Munteanu) was brought up by his Father, Ivan, after his mother (played by Brigitte Nielson) abandoned the pair after Rocky so valiantly beat Ivan in 1982. Abandonment issues are the reigning champions, it was given a fighting chance only to be KO’d with typical ‘Toxic Masculinity’ brushing the issues under the carpet to be dealt with at a later stage.

Not quite living up to its predecessor, the Rocky hardcore fan base will still get a major kick at this nostalgic fight back. More Rocky 7 than Creed 2, the first half missed the brilliance of Coogler, but it came back fighting in the second half. Poignant family relationships at the core gave it an emotional knockout edge which should have been explored further to set the two sides of the series apart.