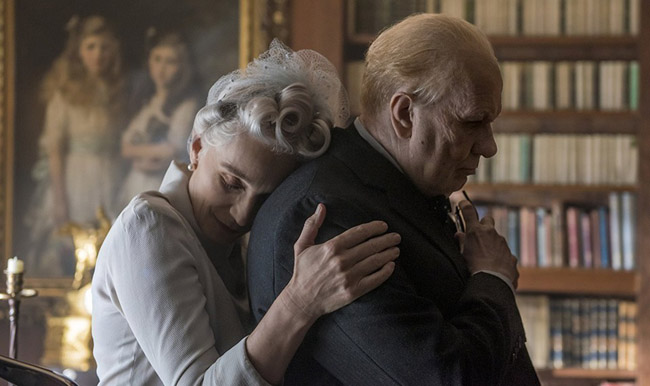 Just a mere seven months after Brain Cox took the lead as Winston Churchill in Churchill, which covered the 96 hours before the Invasion of Normandy during World War II another Churchill based production is upon us with Darkest Hour. This time Gary Oldman dons the prosthetics in his finest hour in what could be construed to be the prelude to Christopher Nolan’s Dunkirk, but without the wrought intensity.

If you’re looking for a war film with lots of action, you are not getting it. Joe Wright’s biopic focuses on the conversation and speech as its weapon of choice with an intimate dialogue that forces the concentration to attention. With Oldman’s Oscar bait performance leveraging its weight as a serious contender, it nevertheless manages to miss the mark as a gripping portrayal of the weeks leading up to Operation Dynamo.

Focusing on Churchill’s early days as Prime Minister, the story opens in 1940. Neville Chamberlain (Ronald Pickup) as Prime Minister is hanging on to his position by a thread after his efforts to deal with the ensuing German threat simply isn’t working. After Chamberlain forcibly resigns and Lord Halifax (Stephen Dillane) is passed over the cabinet begrudgingly agrees the despised loose cannon that is Churchill is the man for the job. Our first introduction to Oldman’s Churchill indicates the man as a rambling, miraculously uncouth man with a sardonic wit, in an extremely unflattering dressing gown and who is in no way surprised at his sudden elevation.

The film proceeds to follow Churchill over the course of a number of weeks. He is faced with battles, not only with the impending threat of German invasion but also the lack of support and backbiting from his own cabinet. He stubbornly refuses to enter peace talks, with aggressive action, his number one choice of dealing with Hitler and his Nazi army. He also has to consider the monumental task of putting into place the evacuation plans of some 300,000 men from the beaches of Dunkirk.

In Wright’s richly textured vision, Oldman nail’s his performance as Churchill with intricate detail from his rambling speech, gauche mannerisms and hot headed temper with panache. It’s hard to even contemplate where Oldman finishes and Churchill begin as the man and the character become one with the help of amazing prosthetics.

Although the story centres on the powerhouse figure of Churchill, the screenplay fails to satisfy in its portrayal of the women of the period. One is Churchill’s ever loving and ever constant wife Clementine played by Kristen Scott Thomas. Booted to the sidelines with a lack of a second thought, she sporadically makes an appearance to give Churchill the boost he needs when the chips are down. Thomas, as always, is magnificent in the less than talked about role and she deserved so much more screen time than is permitted.

There is no doubt, had it not been for Oldman and the visually stunning composition of the film, Joe Wright’s biopic could have been a completely different film. One not even worthy of the dramatic victory Churchill heralded for his country. Centring on crucial speeches can lead the dialogue into monotonous tedium and the lack of urgency can at times become that cure for insomnia. Oldman is the sole victor in this relentless war.

Darkest Hour is out in cinemas January 12th