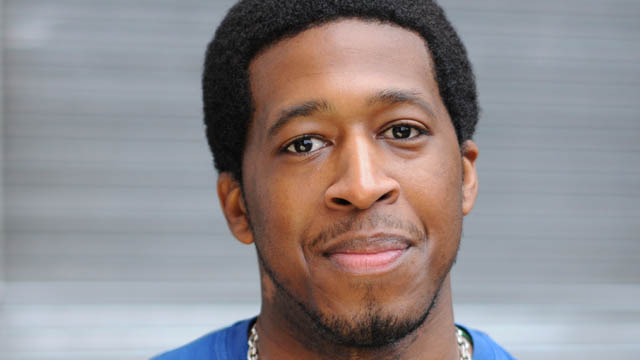 Looking for fresh new talent to watch out for? Well let me introduce to you to Darren Hart. I stumbled upon Darren when I decided to go against my better judgement and indulge in a bit of Christmas spirit and went and saw Mother Goose at the Hackney Empire. Not only did I have the best night out but was blessed to encounter the talents of this man. He had me in stitches. Instantly I knew I wanted to sit down for an interview to find out a bit more about this guy and shine some light on his talents.

Firstly congratulations on yet another fantastic panto in Mother Goose at the Hackney Empire this year! You played Frightening Freddie and starred alongside some talented actors. I absolutely loved it, what’s it like doing panto? I can imagine it’s a lot of fun and you guys get up to some silly antics.

Glad you enjoyed the show. Panto is so much fun to be a part of. The cast really become a family as we spend more time in the theatre than with are love ones over Christmas. Panto is amazing to do as its many children’s first taste of theatre and I love being a part of that. As for silly antics what happens in the green room stays in the green room. Is there any silly embarrassing moments any of your co-stars had which you can share with the Flavourmag audience?
Boy………..this year we didn’t have to many moments but the one that comes to mind was during the opening number, one of the dancers took a fall. Now, I will not name her as the embarrassment of 1000 people seeing you on the floor with your skirt over your head knickers on full show is enough.

You seem to have a long standing relationship with the Hackney Empire, starring in not only Mother Goose but Puss in Boots and Dick Whittington, what keeps you coming back to panto each year?
Hackney empire is a wonderful place to work. The staff there are amazing and the theatre is beautiful. I have a lot of respect for Susie McKenna and was truly honoured to work for her, so whenever she calls I am there. It’s a great feeling to enjoy your work and to be a part of one of London’s best panto teams.

Tell us a bit about Darren Hart, How did you start out in acting and why choose this path?
Well I was member of the theatre royal Stratford east youth group and found a love for the stage here. I set up my own company with Ricky Norwood, aka fatboy from Eastenders, and started producing shows for young people by young people. Acting work started to come in and I treated every job like it was a lesson at drama school. Leading me to where I am today. I believe that god has guided my path and I pray he continues too. Darren aka Hartman is fun, creative and kind. The type of person you would want on your side not against you.

You’ve had a really good start to your career working within theatre but in 2014 you landed a role in the film Starred up playing MacDonald alongside Jack O’Connell. Considering your background in theatre what made you make the move onto the big screen? Is film your ultimate goal?
Starred up was amazing to be a part of and I am still in contact with many of the cast. As an actor I have always wanted to challenge myself and filming is very different to being on stage. I really enjoy the challenge and hope that my performance on screen was honest and true. I love to challenge myself. My ultimate goal would be to have my own show on TV, my own radio show, staring in a movie and in a west end show all at the same time.

Not only have you starred in theatre and film but you’ve also had voice roles via BBC Radio 4 and had a number of appearances on TV in MTV’s Flash Prank, BBC’s Gigglebiz and Holby City. Which medium do you prefer? Stage, Screen, TV or Radio and why?
That’s a really hard choice as I honestly love them all for very different reasons. If I really had to choose which one I prefer I would have to say theatre. The buzz I get from performing in front of an audience is something else. Just wish I could get screen wages for performing on stage.

Obviously, from your previous roles you have a strong background in Comedy, is this the route you wish to stay on or do you have any plans on going down the more serious route? Are you afraid you may get type cast in comedic roles?
I am up for everything. Starred up showed a lot of people a different side of me. I love comedy and hope that the roles continue to come in. My agents at Sainou are amazing and I believe that they will help keep me busy. Honestly, I don’t worry about being type cast I just want to continue being cast in wonderful engaging projects.

What has 2015 got in store for Darren Hart?
I have been blessed in 2014 so looking for more of the same in 2015. I hope that you will see a lot more of me. I have projects of my own that I will be pushing. One is my Hartman’s House event that takes place at the theatre royal in Stratford on the last Sunday of every month. It’s a fun night out for the whole family. I am launching the “Can you kick it show” an online football show plus developing shows with the BBC. My agent has a few things in the pipeline so I am looking forward to 2015.