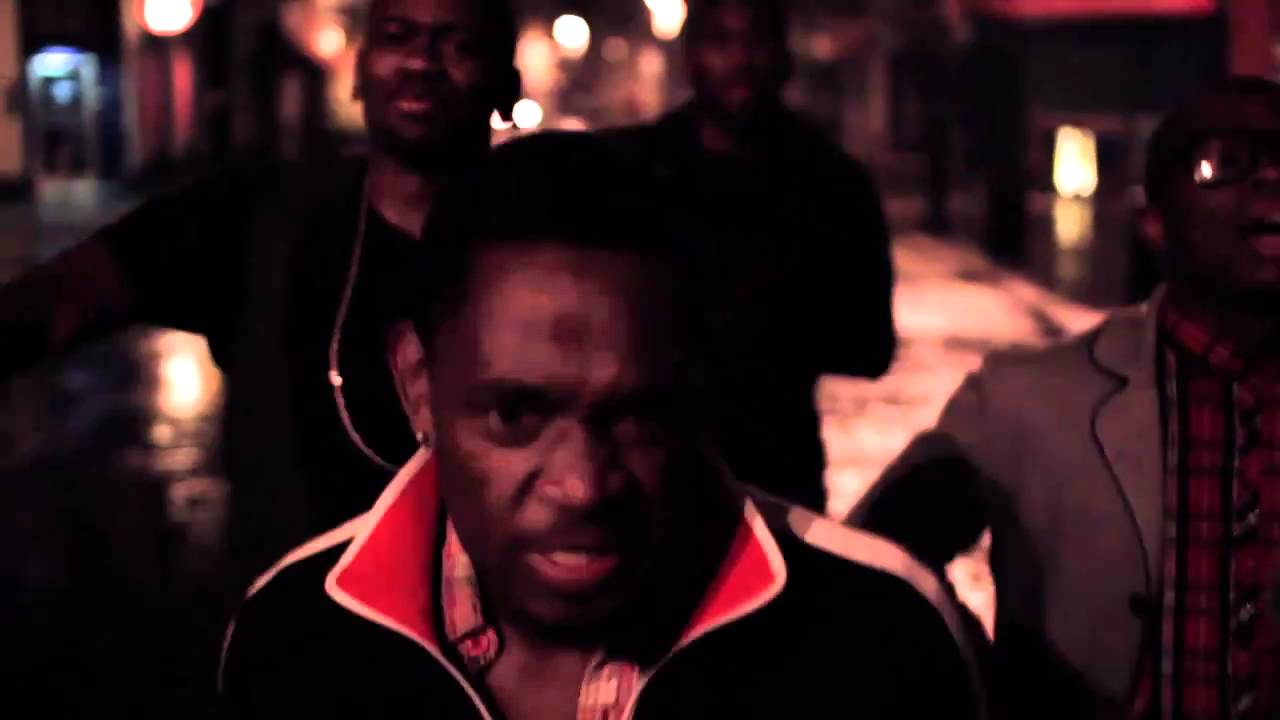 British actor Aml Ameen makes his directorial debut with the short film Drink Drugs and KFC (DDK), a coming of age romantic comedy, which sees geeky teenager Nathan (Kedar Williams-Stirling), in Love with Montana, the most sort after girl in college. It’s his last night to proclaim his feelings, but standing in the way is her ex boyfriend Max(Mikel Ameen) and the crew he’s trying to gain acceptance from. This Saturday The Community Channel premieres four landmark films from the British Urban Film Festival (BUFF) with DDK being one of them. We caught up with the writer/director for a quick chat. Why did you want to be an actor?
As a child, I loved imagining and becoming characters, I was actually discussing this story with my dad, a few weeks ago, and he was saying, I would pretend to be the Thunder Cats. Run around the house with Mikel (Aml’s younger brother, who stars as Max in DDK) just creating worlds, and we’d do this for hours on end. Finally my dad came to me one day, and asked what did I want to be when I grew up, and I said ‘an actor’, I was 6 years-old. I think this game chose me.

We’ve seen you in The Bill, Harry’s Law and CSI and now you’re directing. Why did you want to take this leap?
A few reasons. First I’m a writer/ director, which means I’m creating the stories I want to tell, and I think that’s a big part of it. I have a desire to tell stories that I love, stories, that have not been touched upon. I’m also learning as I get older, that I’m a bit of a control freak, and as a director or producer, you’re involved in the process from conception until it materialises. While as an actor you’re much more of a cog in the wheel, facilitating the director and writer’s vision. I think I’m at a stage where I’m getting more creative satisfaction out of doing all of it, and I can’t wait to take it to the next level.

“Drink Drugs and KFC, is a story inspired by my youth, not necessarily lived by me, but certainly inspired by real events.”

So tell us a bit about the short film, is it based on real events?
Drink Drugs and KFC, is a story inspired by my youth, not necessarily lived by me, but certainly inspired by real events. Nathan (played by Kedar Williams- Stirling) is who I was when I was 16, in love with the popular girl not quite knowing what to say to get her attention. I was always nervous when approaching her (Montana was her name, and it is in the film), and a bit of geek, but sincere. I grew out of it (laughs), but it took one crazy summer, where I was exposed to urban culture. Being a professional actor from the age of 6 and going to stage school, performing in the west end, working with Michael Jackson, you don’t really have the normal experience of a young person growing up in London. You are very sheltered from the reality of the world. So when I met the (real life) DDK crew at 16, it awakened a new world I wasn’t previously exposed to. They were fun, audacious, and cool.

What inspired you to write it?
I remember writing down events when it was actually happening, in my phone. I always said to my friends, ‘I’m gonna make a film of the shit we get up to, cause it’s like a movie’. On another note, I really want to make those coming of age, buddy films, romantic comedies. I especially think it’s a time in British urban cinema, where humorous stories from this perspective would be a refreshing thing. So hopefully I’m able to do this with this short and the features to come.

The main character is described as a geek, looking back how would you have been described at school?
I went to one school my entire life for 16years, and I was very popular. But popularity in a stage school, is about how talented you are, how much you are working, and what TV jobs you’re getting. I worked a lot so I was popular. But my first year in Barnet College was a culture shock. In college during my first year I would describe myself as a sideline person, lost in the background. But by the second year I had guest appearances on Holby City and The Bill and became ‘that actor’, which changed things, funny that. Shout out to my old boys Flex and John, for giving me an education. What was life like growing up for you? I come from a big beautiful entertainment family, we’re extremely close, and had a lot of great times. I spent most of my formative years trying to make it as an actor, going for auditions, not getting jobs, getting some. My friends were people from the entertainment world and a lot of my life has been consumed with the game. How has it been trying to pursue an acting career in the States?
I’ve been really lucky, mostly because of Harry’s Law. The job really changed my career, and personal life. I have a great team out here, and they support the full Ameen Dream, so to speak. I’m grinding and working on building a solid reputation brick by brick and creating my moment. The only difficulty at times has been really needing to be here in the US and turning down good work at home. My UK fan base has been great to me, and I wanna make sure I’m taking care of that. The movie has been likened to “Super Bad” or “American Pie”.

What else would you compare it to?
My writing at the moment has been really about friendships, and romance, Drink Drugs and KFC, and few other projects I’m working on, really centre on those themes, probably inspired by the time in my life. I’d liken DDK to, The Wood, House Party and The Goonies. Stephen Spielberg is one of my favourite directors.

What’s your favourite comedy movie and why?
Probably House Party or Coming to America. With House Party it’s just so relatable to how I grew up, and those crazy night in your late teens. Coming to America is an event, the central story of this prince leaving his country on a quest for love is so outlandish, but fun. Eddie takes us on the journey with these crazy characters, and it stands up, as time goes on, a classic.

Would you like to continue writing and directing films in the future?
100 Percent. I’m very drawn to it, and believe I have talents to be nurtured in this area. I’m not a person who subscribes to putting myself in a box. I also think it’s the future for any person who wants to be active in their career.

“I’ve never worked with Ashley Walters, many fans want that, and have asked why it hasn’t happened yet.”

If you could work with any director or actor/actress, who would it be?
There’s so many, names like Martin Scorsese, Steven Spielberg, I really like Steve McQueen (director of Shame).

I look forward to working with Noel Clarke again, never worked with Ashley Walters, many fans want that, and have asked why it hasn’t happened yet.

Tell us about your role in Red Tails?
Red Tails is when I started to see proof that this Hollywood Dream I had as a child can actually happen. Me becoming a Hollywood actor has always been the plan, the goal, even when doing The Bill, I was pretending it was an Oscar performance. I put that earnest in all my work. So meeting and working with Cuba Gooding-Jr and Terrance Howard was a moment. They were focused and welcoming, and I could really tell they have a respect for British talent.

What’s next for you?
Such a big question. Life? Who knows? One thing I’ve learned especially being an actor, you’ve got to plan, have perseverance but learn the art of improvisation. Become really great at being able to adapt as life unfolds. Career wise, Harry’s Law Season 2 is playing in the US and will be in the UK, I’m in it towards the end. Evidence a film with me and (True Blood Star) Stephen Moyer is out in the summer. My new AmeenDream Entertainment short film 12 will be playing at festivals over the summer.