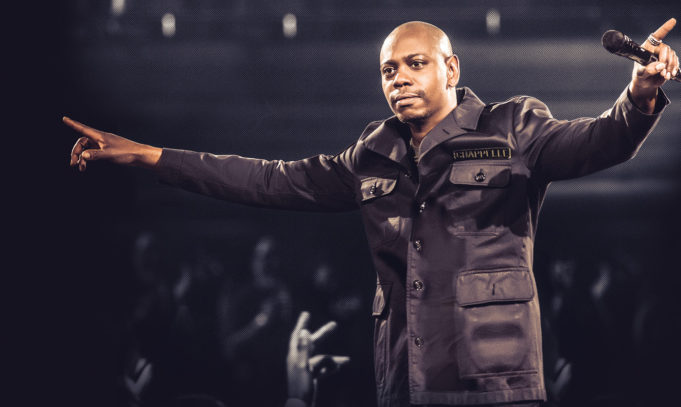 Comedy icon and legend Dave Chappelle has just announced that he is back in London for two intimate shows at the Adelphi Theatre & Hackney Empire on Sunday 2nd and 3rd of June respectively.

Tickets for Dave Chappelle go on sale on Monday 20th May at 10 am and are sure to sell out immediately.

Dave Chappelle is making his triumphant return to the U.K, after his former sold-out run at the iconic Royal Albert Hall last year with comedic genius Jon Stewart. The internationally recognized stand-up comedian and actor’s trademark wit and sharp, irreverent social commentary explores race, popular culture, sex, drugs, politics, and fame. Arguably the most-touring comic on the circuit, Chappelle has performed more than 1,600 concerts worldwide in the past four years, selling out shows within minutes of their announcements.

The past few years have been banner for Chappelle. In 2017, he released four highly anticipated specials on Netflix: The Art of Spin, Deep in the Heart of Texas, Equanimity and The Bird Revelations. All four specials were delivered on vinyl as double-feature albums and received Grammy Awards® for Best Comedy Album in 2018 and 2019. Pollstar awarded Chappelle with Comedy Tour of The Year in 2014 and 2018 and he captured his second Emmy® for Outstanding Variety Special with Equanimity in 2018.

DO NOT miss this amazing opportunity to see Dave Chappelle LIVE, get your tickets from Live Nation at 10 am on Monday 20th May.