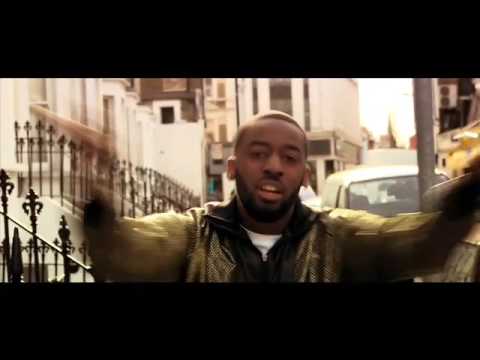 When south London music producer DaVinChe walks into the room, with his trendy ghetto-preppy-style it is easy to assume that he has just come from a photo-shoot. ‘I like wearing bright colours, like ‘Notice Me!” he says laughing lightly at his comment ‘and I’ve also got on an exclusive pair of Reeboks but I’m not telling you where they’re from.’

His personal style reflects the music he makes, it’s cool, unique and engaging. The 23 year-old began his music career in his teens producing beats in the studio whilst still wearing his school uniform. ‘It used to be difficult to work with older artists,’ he states. ‘I’d still be in my school uniform and telling them to sing a song in a particular way, which didn’t always go down well, because you’d just get that “are you having a laugh” look.’

He co-founded his record company Paperchase Recordings when he was 16, where he is responsible for the creative direction. He quickly became one of the UK’s most renowned producers. Having worked with some of the UK’s finest talents, such as Kano, Tinchy Stryder, Tinie Tempah, JME and Skepta, DaVinChe is now ready to move in a new direction with his debut album Open Minded. Flavour sat down with DaVinche to talk about music and fashion.

What are you wearing right now?
Uniqlo! I love Uniqlo. I love the colours because I quite like to wear bright colours. I’m a colourful person. I like wearing bright colours, like “Notice Me!” (laughs) and I’ve got on an exclusive pair of Reeboks.

Where are they from?
I’m not telling. (laughs) I got them from the UK but I’m not saying where.

So how much of what you actually wear is down to you and how much is decided by your stylist?
On a day-to-day basis everything I wear is my own, but for videos and photo-shoots, Gemma (my stylist) picks out what to wear. In fact she picked out my outfit for my last video ‘Rider’.

I think your sunglasses are your staple piece of clothing/accessories, right? Why?
They have been, in the past, but not intentionally, you know. At the time, I did genuinely just like sunglasses; I had so many. I did the hat thing and Adidas statement for a while too. But I don’t wear them any more. No particular reason, I’m just… moving on. I quite like scarves at the moment though, and driving gloves are cool.

What’s the most expensive item of clothing you own?
Trainers. I have a lot of trainers. But exclusive trainers are typically around £120, so nothing to excessive. A lot of them are Adidas.

Describe your style.
It’s a nice balance of hood and preppy. My jeans are too low to be preppy. And there isn’t really a category for that, which is why I like it. A lot of influence comes from American-style, but at the same time I love British style and I try to take elements from both cultures and put it together for me.

Do you have a favourite designer/brand?
Adidas. I wear a lot of Adidas. I love it. I’m also feeling Carhartt jeans because I’m not really the type of person to spend a lot of money on clothes than necessary. I think I’ve got to a point where I’ll spend a decent amount on something like Evisu jeans, because of the quality. They’ll last and so I see them as an investment as well.

Which artist’s swagger do you think is on point?
Kanye! (laughs)

Why?
I think he has this subtle fashion sense – In the Keri Hilson‘s ‘Knock You Down’ video he isn’t dressed up and it works. He still has that swagger about him. I like that.

And which UK artist’s swagger do you think is on point?
I used to like Wiley a lot; he always used to come out with the freshest crepes and fitted hats.

The whole 80’s look is making a big impact in the fashion world at the moment. What do you think of it?
It is coming back isn’t it! I like elements of it, like the Adidas look. That’s cool. But then I’ve come to learn that things can look good, just not necessarily on me. (laughs) Like I like the big trainers with tongues outs, I’d wear that. And I really like the clashing colours, but I’m not a fan of the big chains or hats.

What other item of clothing/accessories would you never wear?
A ‘man-bag’! I’m actually really open-minded but a man-bag is just not for me.

What’s it like working with some of the UK’s finest urban artists?
Really good as each person is different so each experience is different and so that makes it difficult to explain. And because I started in the studio at such a young age, I’ve has so many different types of experiences, like, it used difficult to work with older artists. I’d still be in my school uniform and telling them to sing a song in a particular way, which didn’t always go down well, because you’d just get that “are you having a laugh” look.

Who have you enjoyed working with the most so far?
That’s a tough one. But Cleo Sol, who is on the Dirty Canvas label, is actually one of my favorites. She’s fun to work with and has a great voice. She featured on Tinie Tempeh’s ‘Tears’. She can really interpret at lot of my melodies and ideas and bring it to another level.

Who would you like to work with in the future?
I’d like to go down a different route and work with James Morrison. I like his tone and a lot of the songs on my new album are heading in the same direction as his sound, and I think I could really work with that. I’d like to work with Natasha Bedingfield as well. She has a good tone too. Husky tones do it for me.

Do you have other interests besides music?
I’m a firm believer that if you want to be successful, you have to dedicate your life to that, which I why I’ve intentionally stayed away from anything else, to be honest. But I do have other odd hobbies; I’m not a total saddo.

What else would you being if you weren’t making music?
At school I was good at English and I enjoy writing, I co-wrote a lot of the tracks on my new album. But I’d probably be doing psychology.

Really?
Yeah. I actually have a keen interest in psychology, and read a lot of psychology and philosophical books.

What song do you wish you had made?
Ah! There are a few Timberland tracks that I wish I had done, that I could hear myself making, like Aaliyah’s ‘We Need a Resolution’. I love that track, or even more recently, Rhianna’s ‘Rehab’. But there are a few tracks from every producer.

Who is your favorite producer?
I like elements from every producer, like the song writing and vocal production form Rodney or the Underdogs, or beats from Timbaland or the innovation created by Pharrell & the Neptunes. But I also like grooves from Teddy Riley, but the problem is that we don’t really get songs like that any more. Its rare to get songs that last, because now adays singles & tracks only last about a week.

There’s seems to be this transition happening the music scene where grime is ‘leaking’ into popular culture and the charts (i.e.: Dizzy Rascal, Chipmunk, Tinchie Stryder, etc.) What are your thoughts on that?
Finally! (laughs) I say good on them. They’re creating this ‘yellow brick road’ for us to follow, as such, because ‘grime’ and urban music in general have this stigma, that it’s not good. Now I’m not saying every single urban track is great but now we’ve got good (management) teams behind us and bring us forward.

Where do you thing the UK music scene is heading?
I don’t think ‘grime’ is a phase, like back with UK garage. What happened was that it became too popular, and everyone wanted to be involved and people started misbehaving, then that lead to everyone stepping away from it, all at the same time. But now, it’s more like urban acts making popular music and developing it so that it’s not such a niche market anymore.

You started making music from a very young age, 15, how much do you think the UK music scene has changed since then?
Well, I’ve seen it go through waves and phases. Because when I started, back then, the biggest influences in the industry were people like Wookie, Sticky, and dance tracks. Then it moved to grime and slower beats, and now it’s speeding up again with funky house; Its all cycle that’ll always continue.

You’ve worked on many tracks that have been huge in the club scene, would you be more happy with a song that’s popular in the club scenes or a track that has made it into the charts, in the Top 10. Because a lot of urban tracks tend to usually be one or the other?
I’m greedy, so I wouldn’t feel like I had done my both properly if I didn’t get both.

You are a trained guitarist and pianist… why grime?
Why not? I just love the music. I tend to get into something when I hear what I can bring something to it, and that’s what happened. For example, I would work with an artist if I know what I could bring to them, so I would say “I love your tone, but I would do a different type of song for you…”. So with grime, when I first got into it, it was all the same, the standard Play station music, which was good at the time but I felt I could bring cords, sounds and singers in to the music, which is what I did.

With this album you’ve taken a lot of influences from different genres of music and brought them together, how are you expecting people react to it?
I honestly don’t know. On this album, I did me; which is why there are so many genres that you typically wouldn’t find together, but not in a mish-mash kind of way, I genuinely think I pulled it together well.

The tracks that I have heard from the album sound very different from what we are used to hearing from you (i.e. grime) what made you/inspired you to produce a different genre of music?
I find that in different genres you can express yourself differently; I wanted to say other things besides ‘she’s a hood chick’. Like the track ‘Stunners’ on the album is me expressing how I felt at the time; just me being me.

Who is your favorite indie artist/group?
‘Everything in its Right Place’ by Radiohead is a good one, but I don’t particularly have any favorites. I also like classics from Coldplay and Oasis, and Kings of Leon more recently. I think the album I have that’ll most shock people is Avil Lavine. (laughs) I can listen to the album and enjoy the work & skill that has gone into making it.

What advice would you give  to people wanting to do what you do?
Live and breathe it. Take it seriously.

You’ve been making tracks for so many other artists in the past, what made you want to do tracks for yourself now? And why now?
The general public don’t know the work I’ve done, and those that do know me think that I’ve gone away, so I think its time; A natural progression, because I’m older now and ready to put myself out there.