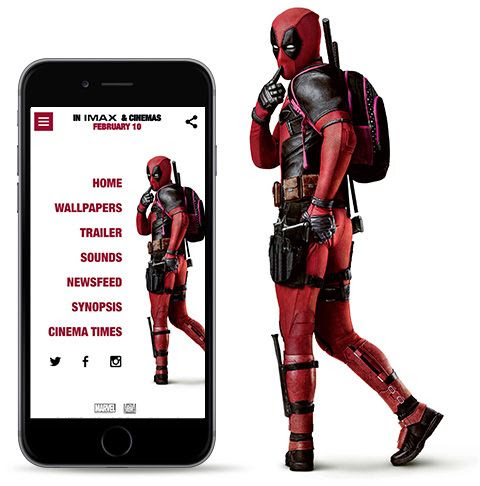 What better way to join the Deadpool hype than with this awesome new app where you can download Wallpaper’s and much more.

Celebrate the cinema release of Deadpool with the official Deadpool app. One for all fans, the app lets you add exclusive wallpapers & ringtones featuring Deadpool, to your device. Plus view images and videos from the movie, in IMAX and cinemas 10th February 2016.

The app comes with the following Features:
Exclusive Deadpool wallpapers for your device
Exclusive ringtones & alerts for your device
Find local cinema listings for Deadpool
The latest news, images and videos, including behind the scenes footage

Based upon Marvel Comics’ most unconventional anti-hero, DEADPOOL tells the origin story of former Special Forces operative turned mercenary Wade Wilson, who after being subjected to a rogue experiment that leaves him with accelerated healing powers, adopts the alter ego Deadpool. Armed with his new abilities and a dark, twisted sense of humor, Deadpool hunts down the man who nearly destroyed his life.
Starring Ryan Reynolds, Morena Baccarin, Gina Carano, T.J. Miller and Ed Skrein the app available TO DOWNLOAD ON THE APP STORE & GOOGLE PLAY* http://www.deadpoolwallpaperapp.com