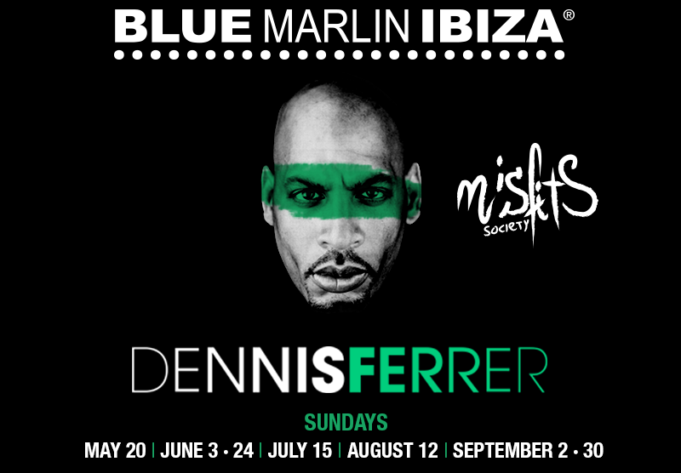 Influential house artist Dennis Ferrer is setting up for the season at Blue Marlin in Ibiza.

The Objektivity boss will play seven dates from May 20th until September 30th with a series of very special guests joining him including fast-rising talent Nasser Baker, plus the likes of Skream, Heidi, Art Department, Mathias Kaden, De La Swing and more.
Dennis Ferrer has long been contributing the global house music movement with his own productions, DJ sets and Objektivity label. Mixing up deep and tech house with melodic techno, he often tops Beatport charts and is an award-winning producer with his finger firmly on the pulse. He is quick to spot fast-rising talent and has embarked this year on a tour with Skream that sees them play with local DJ talent as well as produce together under the moniker LOCAL HEROES. He also debuted at fabric London and put out the huge Old Yella track to great acclaim. Now heading into an another big Ibiza season, it is sure to be one of the most vibrant and vital residences of the summer.

Playing each and every party is Nasser Baker, who is the next generation of house talent and has been carefully unearthed by Dennis to showcase his skills at Misfits Society events this summer. He has a huge record coming out on Circus Records in June and always shows musical maturity on his productions. Veering from house to tech, he is a deft DJ who will bring a real freshness to the party.
Next to Nasser, the opening party with feature taste-making Canadian artist and No 19 Music boss Art Department, and after that the likes of Watergate regular Mathias Kaden, elrow’s main man De La Swing, Radio 1 Jackathon mistress Heidi, party starter Skream, Spanish hit-maker Dennis Cruz, CJ Jeff and Andre Hommen all making key appearances.
This is sure to be a colourful party that covers all shades of house music at one of Ibiza’s hottest beach spots.
20/05/2018 Art Department + Nasser Baker – opening party
03/06/2018 Mathias Kaden + Nasser Baker
24/06/2018 De La Swing + Nasser Baker
15/07/2018 Heidi + Nasser Baker
12/08/2018 Skream + Nasser Baker
02/09/2018 Dennis Cruz + Nasser Baker + CJ Jeff
30/09/2018 Residents: Andre Hommen + Nasser Baker + CJ Jeff
FB Event: https://www.facebook.com/events/373288579844623/