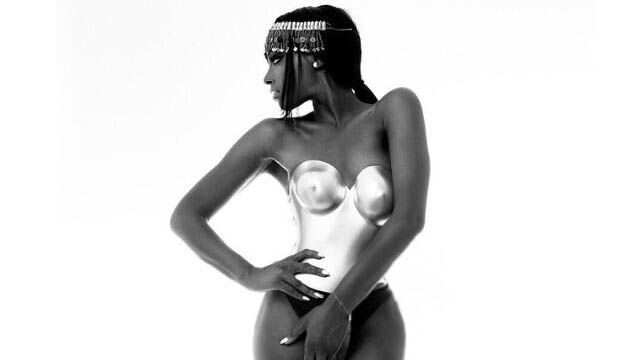 After a short reunion with the girls of Danity Kane, Dawn Richard is now back and doing it alone to continue with her trilogy of albums. Today she gives you her second solo album, Blackheart! Blackheart is the second instalment to be released by the singer-songwriter from her heart trilogy. This album follows on from Dawn’s hugely successful independant, number one, debut album Goldenheart. Blackheart’s release falls on the two year anniversary of Goldenheart and is the perfect way to celebrate. Upon Goldenheart’s release it received universal acclaim from music critics, who praised its grand musical scope and Richard’s theatrical personality. It went on to sell over a massive 3,000 copies in the first week alone, which is something you don’t often see from an independant release and unsigned artist. Here at Flavourmag we are sure Blackheart is going to perform just as good, if not better.

The sophomore album is supported by its lead single “Blow” with the music video debuting across Vevo platforms. Since the videos release in late October 2014 it has picked up over 415,000 views on You Tube alone and counting. Again something you rarely see from an independant release and unsigned artist. Dawn showcases her new look and sound in the dance heavy video for the track and gribs your attention right from the start.

“Blow speaks about the ferocity of the heart movement, In a time where numbers and stats matter, we simply don’t give a f**k if you like us. We are here. We are strong and we are beautifully imperfect. This visual and record was a perfect way to say…The hearts are still here.”

Miss Richard is an artist who always likes to keep her hearts, the fans, happy and always likes to give back when ever she has the chance. Usually this is in the form of free music. Prior to the release of Blackheart the singer released the free tracks “Physical” and “Professional” via her Soundcloud page. Only a few days before the official album release date Dawn also dropped the track “Castles” via Yahoo music. These tracks delivered snippets of what was about to come this time around. All three tracks received huge praise from fans and music critics world wide. Blackheart is a sound created by Dawn’s inspiration from trip-hop, electro-pop and soul. It couldn’t be more different from Goldenheart but at the same time have a strong and clear connection to it. The beats go hard individually on each track and blend perfectly with Richard’s super cool and unique vocal sound. Dawn aint playing this time around and it really shows in this well designed and brilliantly put together album. It is just like Goldenheart and is a piece of art before its time. With that said it is music that should not be missed. The singer-songwriter has been writing and producing alongside Noisecastle III to bring you the perfect sound for Blackheart. The albums artwork was released in late 2014 and shows a mans face being removed from Dawn’s face. The cropped image of the singers face is an image way back from her Goldenheart promo days. Maybe a hidden message? When quizzed by a fan on Twitter regarding the cover, Dawn replied with – This movement has not gender or genre, the cover shows that.

The tracklist for the album was released at the end of last year in a cool and unique way. Dawn released three different images of herself, on her Social Media pages, with the names of each track penned across different body parts. After a previous hiccup in late 2014 which saw a preview of the tracklisting and the tracks appear on Amazon, fans were waiting to see if there favourite made the cut. The first tracklist saw 14 tracks make up the line up but the official tracklist now sees 13. The dope unique style that this chick oozes is plastered all over the album perfectly. Danity Kane fans have not been forgotten by the song-writer and have received a treat in the form of a collaboration with Aundrea Fimbres. Fimbres appears on the track “Phoenix” which is a true banger and saw an early release via Spin Magazine yesterday (14th January) on Soundcloud. So are you ready to enter the Black Era? Pick up your copy of Blackheart today and let us know what you think. Here at Flavourmag we have ours on repeat already! This album and this unquestionable talent alone is definately not something to sleep on!