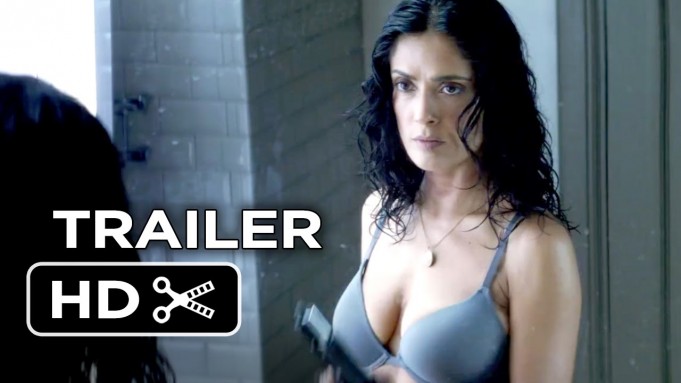 Selma Hayek playing a kick ass tough female warrior is exactly what is needed on the big screen but we can’t help thinking that this has a touch too much of a sexual context to it.

Everly (Selma Hayek) has spent the past six years, locked up in one apartment, after being taken against her will, and used as a sex slave. There comes a time when she simply can’t take any more and after one brutal episode to decides to take matters into her own hands and make her escape, things are however never that easy as Taiko (Hiroyuki Watanabe), the evil crime boss who is a human trafficker, wants to punish her for disloyalty, which means only one thing, violence and death for everyone.

We start off the film, with a naked Selma Hayek crawling across a bathroom floor and from this moment forward we are subjected to a continuous hail of bullets and fighting violence where anyone who tries to take her out ends up losing their life in a bloody and gruesome massacre.  Hayek certainly is that bad ass female heroine our movies have been longing for, she may be petite and extremely sexy, but looks are very deceiving when it comes to her fighting for her life.

Classed as a mystery, action thriller, I couldn’t help but see this more as a comedy, the first instance of this comes towards the beginning of the film when what seems like a stream of killer whores keep appearing after being sent in to take Everly out, one by one they all end up dead with one couple killing each other in an argument over whose going to kill her. Another instance comes after every time she puts on her killer whore heels to leave she ends up having to kick them off in order to kill yet another assassin.

It’s not all brutal violence though, we do have a touching storyline with one of the supposedly dead mean who has been blasted in the stomach (Akie Kotabe), when it appears he isn’t actually dead and starts to build a sweet little friendship with Everly and tries to help her out which is endearing and humorous too.

Everly is just your basic action movie, set in one building apartment throughout its whole hour and a half; storyline is pretty thin on the ground, with relentless violence and scenes that will give you a belly laugh they are that ridiculous, but this is simply one of those movies so bad you can’t help but like it.

Everly is out in Cinema on 26th of June.