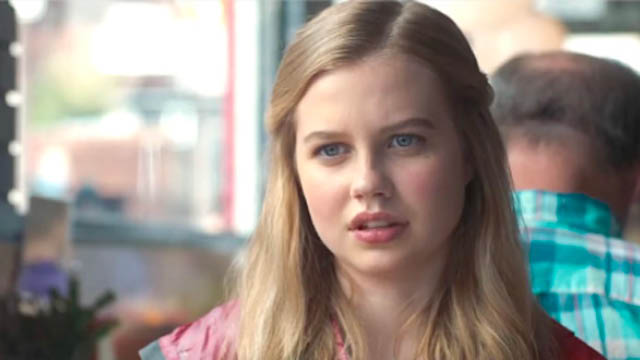 Since bursting onto the big screen as Ryan Gosling’s daughter in The Nice Guys, rising star, Angourie Rice hasn’t been short of a few roles.

The young actress has shown immense potential starring opposite so fairly big names in the form of Nicole Kidman and Colin Farrell in The Beguiled as well as starring as Betty in last year’s Spider-Man: Homecoming opposite Tom Holland. Finally, Angourie has landed the lead role in the film adaptation of Everyday, which is due in UK cinemas April 20th.

Based on David Levithan’s acclaimed New York Times bestseller, Every Day tells the story of Rhiannon (Angourie Rice), a 16-year old girl who falls in love with a mysterious soul named “A” who inhabits a different body every day; Feeling an unmatched connection, Rhiannon and A work each day to find each other, not knowing what or who the next day will bring. The more the two fall in love, the more the realities of loving someone who is a different person every 24 hours takes a toll, leaving Rhiannon and A to face the hardest decision either has ever had to make.

We had the honour of talking to Angourie again for the release of the film; read the full interview below. Last time I spoke to you it was for The Nice Guys – You’ve come a long way since then. Now you’re taking the female lead in Everyday – What was it about this story that got you excited to the point of wanting to be involved?

I had read the book and really loved the concept, so when the film came through I know I wanted to be a part of it because the concept was so interesting and unique and I thought it was such a beautiful twist on a classic love story.

Having been aware of David Levithan’s young adult book – Where you aware of the huge fan base which has spawned Fan art and online chat groups.

I’ve done a few films based on novels, one of them was very similar to Everyday in that it was written for young adults and studied in schools and it had a big fan base in Australia. You know I definitely felt that pressure before; you really want to do the book justice. It’s scary because I’m always someone who says “oh yeah, loved the film, but the books better”. I just tried to do my best to stay true to Rhiannon but to also my own personal spin on it. I was really lucky I had the artistic freedom to do so, so I do hope that fans of the book will like the film.

You mentioned you had quite a bit of artistic freedom, where there many scenes that were improvised?

The great thing about working with Michael [Sucsy], the director was that he always wants to try new things, So he would say do this scene like that line is the funniest thing you’ve ever heard, don’t take it seriously at all. He’ll have a completely different take on it which made it really exciting for me as an actor as I could try out lots of different versions. In the editing room, it means that Michael and the editor both have lots of different takes to choose from, lots of different line readings, and lots of ways of interpreting the scene. I think that was really fun for me to do, I was very lucky that Michael was really into that way of directing, it was really beneficial to me as an actor.

There is always going to be some differences between the film and book, Are there any differences with Everyday that you think the fans are going to love?

Yeah, there are always differences. There are always things you have to cut out and add in. It’s always different because a film is largely a sonic medium, so you need to cater to that. I think the most important thing about adapting a book into a film is that you keep the core themes and ideas. I really do think that’s what the screenplay’s writer [Jesse Andrews] did. The screenwriters have given your character a bit more of an arc by giving her a family backstory – Did that help you in developing your character?

Definitely, it’s really valuable for me, as an actor. It means Rhiannon’s story has been written and I can draw from that what I want. It’s also great because I think Rhiannon’s home life and her life at school and with her friends very much influences the way enters her relationship with A. She has a unique relationship with her sister that very much impacts the way she goes about being in a loving relationship. It was a luxury to have the back story all there, I was really grateful for that.

With the nature of the story being the spirit of A jumping from one body to the next every day – you had the pleasure of a number of different actors and actresses starring opposite you. This must have made filming fun but also quite difficult having to build up that connection with a new actor each time?

I really love meeting new people. That’s one of the favourite things about my job; that I get to meet new people from all over the world and make friends all over the world. That’s so fun. But yeah, that’s also challenging, sometimes in a film, you have one co-star who is your buddy and you’re with them throughout the whole thing. With this film, I’ve got 15 buddies (laughs) and that’s really hard. You have to create the instant chemistry on set even if you’ve just met them. Everyone that played A was extremely talented, very professional, very kind and welcoming. I think that made it very easy. Also, Michael, the director, had a very clear idea and understanding of how he wanted the continuity to play to show in the film. I think it comes across quite well, I hope it’s not too jarring for the audience to see the same character being portrayed by 15 different people.

You also have a same-sex kiss – is this the first time you’ve had to do that?

Yeah, but it’s just part of my job. It was in there because it makes sense in the story and I think it would be avoiding something really important if it was just boys. It’s important, she’s in love with A and there is a certain point in the film where she is able to look past the body A is in. I think that is a wonderful thing, I’m glad it is in the film and they took that opportunity.

Every Day isn’t just a teen romance story; it actually has a positive message that love is more than skin deep and covers a number of different themes. Do you think that teen audiences will see something that’s relevant to their lives and connect?

Even though Michael Sucsy (director) saw 350 applicants for your role, you were always who he had in mind. That must always be quite humbling?

It was really sweet; I didn’t know he saw that many people. I had actually auditioned for the project when a different director was attached. Then when Michael came on board, I had previously met Michael about a different film which didn’t end up going ahead. I was excited that he was going to direct because I already met him and knew him a little bit. I was happy that he cast me, I really wanted to be a part of the project, and I think I must have been going back and forth on it for maybe two months, maybe even longer. I was really hopeful and really wanted to get it and I was really happy that it ended up happening for me. What was the best and most memorable part of starring in the film?

All of it… Em, that’s kind of a clichéd answer (laughs). One of my favourite parts was the party sequence. We had so many young people on set, we had Amanda [Arcuri], who plays Rebecca, we had Charles [Vandervaart], who plays Steve, Justice [Smith], Lucas [Jade Zumann] that was really fun, there was a big gang of us just all hanging out together. Of course, that had the dancing sequence in it which was really, really fun to film; especially because Lucas is such a great dancer, he just went all in. Also, it made me feel better about my dancing because I was really nervous so I just followed his lead (laughs).

Everyday is out in cinemas April 20th.