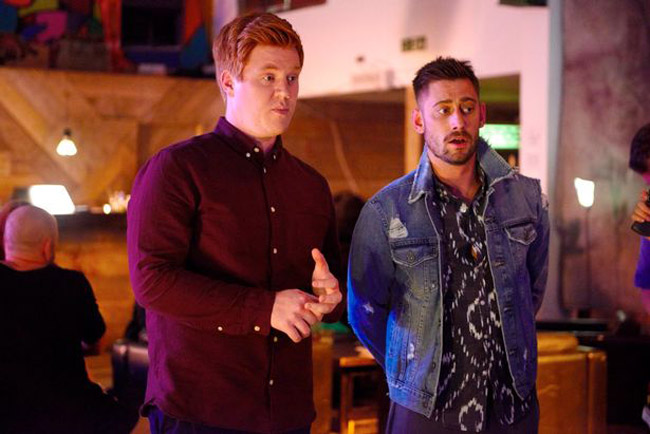 After taking this year’s Horror Channel Frightfest by storm, Danny Morgan’s hilarious horror/comedy Double Date, finally hit the cinemas on Friday the 13th of October. The film, which is a very modern bromance involving tackling the perils of dating when the Unbearably self-assured, and irritatingly cocksure, Alex (Michael Socha) in his loyalty to his dearest friend, Jim (Danny Morgan), decides to get his best mate laid for his 30th birthday.

They muster up the courage to organise a double date with sisters Kitty (Kelly Wenham) and Lulu (Georgia Groome), but little do the boys know, their company for the evening are twisted serial killers, and have other plans for their night ahead.

As Jim and Lulu strike up a genuine bond, his future rests entirely on her conscience, and whether or not she’ll betray her sister and warn Jim and Alex of their nefarious intentions.

We sat down with the film’s writer and leading virgin… we mean leading actors Danny Morgan and Michael Socha for a fun-filled, banter fest of an interview – We could see why they pair made a naturally perfect acting duo that made the film one of those rare gem’s everyone should see. Danny as well as taking the lead, Double Date is the first screenplay you have written, Why horror for your first attempt?

DM – I’m a fan of horror, I like horror a lot. There is also a good audience for horror, a really passionate audience who still go out to the cinema and pay to see things in a crowd because that’s the most fun way to watch horror, amongst a group of people in the dark.

It naturally came around through the idea of having a character that is terrified of talking to women and it ends up these women are actually trying to kill him, so that says horror. I always wanted the violence to be really, really violent and brutal.

MS – You sound like a bit of a weirdo, rather sick. “I just wanted it to be really, really violent” [laughs]

What was your inspiration? Bad experience with an ex-girlfriend maybe?

DM – No not really, I don’t know where these things come from, we need to sit down for a couple of hours to get to the bottom of that. But it came from a general anxiety of around dating and talking to women, it’s such a strange thing for me.

Was the comedy element always part of the film or did that come along later?

DM – No not really, I don’t know where these things come from, we need to sit down for a couple of hours to get to the bottom of that. But it came from a general anxiety of around dating and talking to women, it’s such a strange thing for me.

Yeah, that’s what I have always intended to write, comedy. The short films that me and Ben (the director), made were little comedies. So I always knew it was going to be, We went through different incarnations of the script that was more horror and more comedy. When we first get the film edited together, it was more 50/50 but then we started showing it to people and we just got the feedback that this is a comedy, we should just go with it. People wanted to see more of the lads being stupid and keep the girls more mysterious especially in the first half because that just adds to them being scarier, the less you know about them.

The film is directed by Benjamin Barefoot, who you have worked with previously (Danny), was it easy for you to hand over your baby to him?

The good thing was I never really had to hand over my baby, I just showed him my baby and he said “that’s a nice baby” and we both played with the baby

MS – Made it a better baby, it was a lovely baby just as it was.

DM – It was very collaborative the way me and Ben work is he is always throwing ideas in and just collaborating all the way through really. Even though it says Ben as the director, I’m the writer, Matt’s the producer, the lines were really blurred, to be honest.

MS – Yeah everyone sort of just got stuck in I noticed.

DM – and the cast as well, I was never like “here’s the script”, we got the cast in and wanted them to feel like they can just throw in ideas, but then we knew we had a cast that could do that and do it responsibly and not be just like “I’m gonna be the funniest person in the scene” and try and steal the show. It was always responsible improvisation and Michael is the master of that.

Michael, how much did you improvise, Was there much of your dialogue was your own thrown into the film?

MS – The lines of the script were all said, It’s just I probably added a bit more or re-worded, sometimes not all the time. The whole thing was perfect anyway, as soon as I read it, “these lines are brilliant; I’m looking forward to saying them”. There were times we just had a F****** mess about, I just love doing that sort of stuff.

DM – Some of the lines weren’t obviously written for Michael, so he would change them around in a way that fits his dialect and the way he naturally speaks, which just added to make the whole thing feel more natural which is important when you have this bonkers stuff going on. You’ve got these two guys at the center of it who are natural and believable and everything else can be just bonkers around them.

When it came to casting, did you have any particular actors in mind?

DM – We had a different actor in mind to play Alex for a long period of time, a friend of mine called Daniel Lawrence Taylor, and then last minute there were scheduling problems and he couldn’t do it. So we didn’t have an Alex or Lulu a week before we started shooting but thankfully we had an amazing casting director called Anna Kennedy who through Michael into a room with us. He just charmed the pants off us pretty instantly, and I just wanted to work with him, I thought we could have a good time.

Georgia (Groome) was the same, she came in, had a couple of scenes, I fell in love with her and I knew I wouldn’t have to do much acting with her; she’s just really really charismatic and lovely. Kelly was involved from the start of the whole process, we shot a little teaser trailer when she auditioned, she grabbed me by the hair and slammed me against the wall, Scared the s*** out of me, so I thought she was perfect. We really lucked out with the cast, I’m very, very happy with that.

Is it true that Michael turned up to his audition with a hungover?

DM – Yep [turns to Michael] how do you feel about this story coming out?

DM – To be fair, it was all very last minute and rushed and he came in and yeah he was a bit worse for wear. T-shirt inside out, but to be honest it was perfect. Not saying it would be perfect if he was meeting Spielberg,

DM – When he came in he was clearly very comfortable in the room, to the point he took his T-shirt off and turned it the right way round. So we thought, this is perfect for Alex, it’s just ballsy and funny and a little bit rough and charming.

Michael, it sounds like it was all a bit premeditated!

MS – That’s what I do [laughs] every casting director must know now that I’m doing it on purpose. When I come into an audition hung-over, I did it for a reason.

Danny, You also managed to bag Dexter Fletcher to play Alex’s Dad – how did he come on board?

DM – He is a friend of one of our producers, Maggie Monteith, and she begged him and chucked some money at him and he was up for it. I think he liked the part, so he came down for a day and just mucked about really. He had instant/good chemistry with Michael, they were totally believable as Father and Son even though they’ve got totally different accents. It shouldn’t really work but they just for some reason really clicked. He improvised, made up a load of stuff about Jaffa Cakes, he was a lot of fun.

Michael – Dexter has been around for Donkey’s Years, so what was it like working with him, did he give you any tips?

MS – Yeah, “just do your F****** job, do what you’re paid to do [laughs]. Yeah, I am a big fan of Dexter’s, I know a lot of his friends actually, he came in as humble as you could imagine, riffed with him and played around, just had fun.

That end fight sequence was pretty brutal, we’ve got to talk about that, did Kelly connect at any point?

DM – He had some ice on his crutch didn’t he?

MS – He keeps telling these F******* weird lies, he keeps seeing these interviews as a way to just make s*** up. I want to know what his version of reality is on that set [laughs], I wonder what happened in your head on set!

The film also went down a storm at this year’s London Horror Channel Frightfest, was that a pretty satisfying outcome for you to see the great reaction from the genre’s fan base?

DM – That was amazing, that two days sort of made people take notice of the film a bit more. It was a big IMAX screen, which was weird seeing my face that big. Some faces are not made for IMAX, there made for like iPhones. Frightfest was amazing, it was a really, really good reaction and then winning an award at the end of it was just the cherry on the cake. It was a brilliant weekend.

Double Date is out in cinemas now.