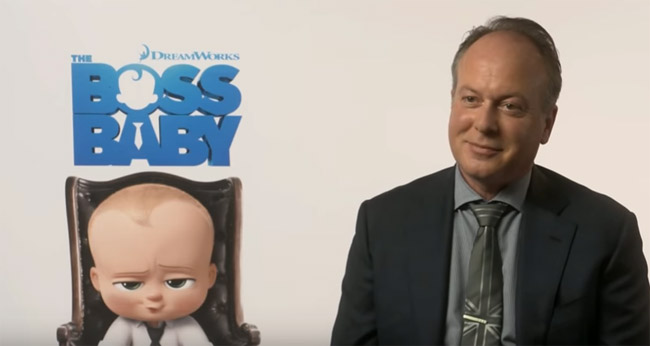 With The Boss Baby hitting nationwide cinemas on April the 7th, Flavourmag’s Film and TV Editor, Zehra Phelan sat down with The Boss Baby and Madagascar director Tom McGrath for a chat about the film.

Tom, who looked the very image of an older boss baby and who has a wealth of animation experience, co-directing all of the Madagascar franchise as well as Megamind kindly shared his thoughts on the making of The Boss Baby with us. Watch the full interview below.

DreamWorks Animation and the director of Madagascar invite you to meet a most unusual baby.  He wears a suit, speaks with the voice and wit of Alec Baldwin, and stars in the animated comedy, DreamWorks’ The Boss Baby.  The Boss Baby is a hilariously universal story about how a new baby’s arrival impacts a family, told from the point of view of a delightfully unreliable narrator, a wildly imaginative 7 year old named Tim.  With a sly, heart-filled message about the importance of family, DreamWorks’ The Boss Baby is an authentic and broadly appealing original comedy for all ages.

The Boss Baby is in cinemas from April 7th.