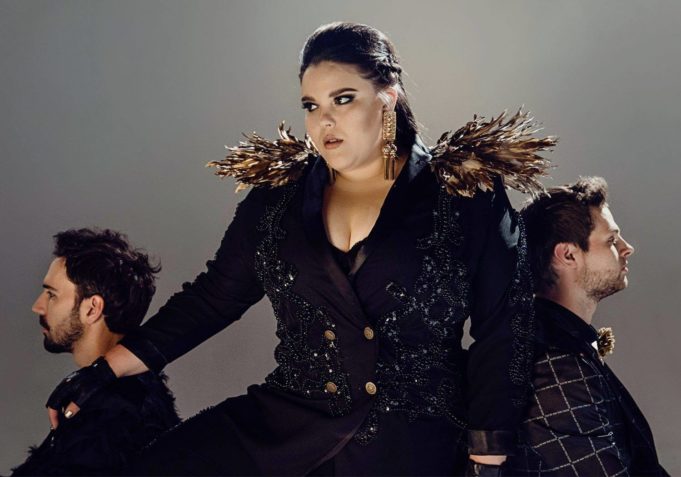 Bang Bang Romeo were one of the lucky upcoming bands that had the opportunity to perform at BBC Introducing Live last week. I sat down with Anastasia, Ross and Richard to chat about their EP ‘Shame On You’.

How did you guys first meet? What brought you all together?

A-  Ross and I go way back, we’ve been writing and doing acoustic stuff together for years but I think we’ve known each other for seven years! We actually met Richard online and it’s only been in the last couple of years that we decided to get a band together and create the ‘Bang Bang Romeo’ everyone sees now.

Who came up with the band name?

A- Yes a Tapas bar in Sheffield and it was a bit of tequila and actually thinking about it. We wanted something loud and proud with the intention of blowing your head off. We write about love, death, hate and happiness. These themes came along and It was actually ‘Bang Romeo’  for about ten minutes and we had another shot and I was like “not sure about that, put another bang in front of it” and it just stuck. We woke up sober the next day and we still agreed with it.

Can you tell me a little about your EP ‘Shame On You’ ?

A- In the space of five tracks, we crossed the Atlantic twice! It’s a proper taster of the album that comes out next June and It’s a really good refection of how we’ve taken the music as well.

A-  I like doing Fugees ‘Killing Me Softly’… no just kidding! I think we’re all going to have different things here. I’m loving performing a track called ‘Bag of Bones’ which we’re looking to do more things with

Ross – Probably ‘Invitation’ at the minute, there’s a little moment in there where anything can happen

Richard – Every show is different for me but I really do like performing ‘Shame On You’.

A- Holy Preaching Nectar and that’s not as random as it sounds. We were very lucky to work with an amazing producer called Chris Kimsey a few years ago and it was our first taste of being in a proper studio, so ‘Holy Preaching Nectar’ is how he described the music and we kept it but we don’t really know what it means

Richard-  It sounds good so we might as well keep it

A – Richard has a nervous poo at every show to the point where we’re going on stage and we’re like “where’s Richard?” but you really know where he is. Richard also shaves his armpits so you can put that down for the record. So Richard plays Frisbee, shaves his armpits and takes a shit…but honestly because we’ve being doing it for a few years now, we’ve been trying to take a JD honey shot before every gig and we just get into a headspace, we’re probably really boring before we go on stage. We try to lock ourselves away from everyone, huddle, do the dance from Wolf On Wolf street, get naked and rub oil on each other.. stage ready after that!

What makes ‘Bang Bang Romeo’ stand out from other bands on the scene?

A- probably the naked rubbing oil… I think and it shouldn’t be this way, it’s happening more and more now which is an amazing thing but when we first started out, it was very rare that you saw a Woman from a rock band and it’s just the way it was. Since the last year or two, girls have started picking up the guitar and I think that’s an amazing thing and we feel as though we’re very lucky to be at the start of that! I think that what sets us apart from other bands is having a soulful voice on top of rock music.

Richard- We’re not afraid to experiment and we don’t tend to stay away from certain genres.

What’s been the weirdest gift you’ve received from a fan?

A- Not any weird gifts, I got given a really amazing letter from a girl and it was three pages long, she let me in to a few secrets of hers that I could help her with personally as I’m a gay woman and she essentially came out to me and that’s an amazing thing! I’ve also had bras thrown at me

A- That’s so millennial isn’t it?

Richard- Your purse for sure

A- Right I do forget my purse a lot but I always pay them back, tour essentials for me are my headphones! Richard needs to get Gillette

What would be the theme song for your life?

A- Oh my god! That’s a hard one! So far it would be Bohemian Rhapsody. I’m a little bit dramatic

Ross- Mine would probably be ‘ A Day In The Life’

A- Oh god! Can you imagine him shaving his armpits or having a poo listening to that!

If you could have your fans remember one thing about you, what would it be?

A- for all of us, I think it would be that you should always be yourself not matter what.

What’s next for ‘Bang Bang Romeo’?

A – We’ve got the Pink tour next year and that’s crazy.. It’s like a dream come true, we get to play Wembley Stadium two nights in a row which is absolutely crazy!