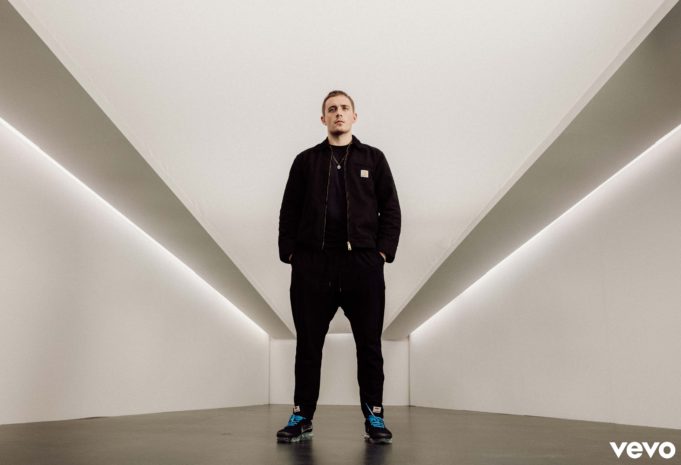 I was lucky enough to sit down with Dermot Kennedy at his VEVO video shoot in London last week and chat about his view on the Irish music scene taking off.

Dermot, a singer from Ireland recently caught our attention when he was picked by VEVO as one of their 2018 DSCVR acts! DSCVR last year acts previously included Jorja Smith, RAYE and Nadia Rose who have gone on to have mainstream success and we can only expect the same from Dermot.

How did you first get started in music?

D- I had a cousin who played and we had a family party one time, I was ten years old and he started playing all night and I fell in love with the whole idea of it! I wrote my first song at 15.

You just released your new EP; Can you tell me a little more about it?

D- It’s basically like a stepping stone going from totally acoustic to whatever it is now with more of an emphasis on the production side with a little Hip-hop included. I recently also released a mixtape that I done with Mike Dean and that was some recordings I had that wasn’t going to be brought out as singles or on an album so we just put them out and getting to work with Mike Dean was incredible.

What’s your songwriting process like? Does it differ from each session?

D- Yeah! It changes every time! It can depend on whom you’re working with! For example, working with Mike Dean could start with the beats he’s got or vice versa! Mike Dean and I come from two different worlds and to be writing together was surprising but also cool that he can fit into my world and I’ll do my best to fit into his.

D- my sound is definitely something that is rooted from acoustic guitars and pianos, that’s where it begins and belongs! I’m just stepping on it a little production wise! I never want to leave that behind and now it’s the production itself thats being influenced and I’ve been listening to tons of hip-hop and that’s changing my style but again I never want to leave it behind because that’s why I started writing songs in the first place

The Irish Music scene has really taken off recently, How do you feel you stand out from other artists?

D- I don’t know if I do as ‘stand out’ as such! There’s a guy who opened for us at the Olympia in Dublin and he’s incredible! There’s a certain ‘scene’ or ‘circle’ of that sort! I wish I was home more because it’s beautiful and it’s always existed in Dublin, this really nice creative hub!

Who was your main musical influence whilst growing up?

D- Probably growing up, it was Glen Hansard from home until I came upon Bon Iver, they kind of showed me that a track doesn’t have to be just acoustic and raw to have tons of feeling in it! They have layers and layers to a song but that passion still comes through

D- that’s an interesting question and this kind of ties back to the way my music is kind of acoustic but also influenced by hip-hop! Say the likes of Ben Howard and Bon Iver are heroes of mine but also I don’t know if that would be the coolest thing in the world to collaborate, I kind of feel like I’m glad they do what they do and I’m inspired by it! There was a time at my studio where Travis Scott was on the phone and he wanted to come over to the studio as he heard one of my songs that I was working on so something like that would have been crazy! D- Not really! One of them that I don’t do often enough is warming up in general and I need to do that more, I’ll probably end up wrecking my voice!

Favourite place to tour or somewhere you’d love to take your shows?

D- My favourite place to play so far is New York but that’s probably because I love the city! I kind of want to live there! Places I haven’t toured… hmm Africa

D- Oh Absolutely! I love it!

Three essential items that you always take on tour?

D- I got a Nintendo Switch recently

D- Right? I’ve gotta pass the time somehow! I also would bring a notepad and headphones

D- I’ve had a LOT! Basically before we played the Olympia in Dublin, we were filming the whole night and some of the filming was done at the soundcheck so we had to make sure we were wearing the exact same outfit in the evening and I totally forgot to change back into the same outfit from the soundcheck and I was wearing the wrong trousers before going on stage! The Olympia has this big massive curtain and ten seconds before they opened I quickly changed

S- Wow! And nobody knew? I’m sure the girls in the audience would of loved to of seen that!

What do you do to relax when you’re not performing?

D- These days when I’m not performing I’m constantly in the studio and It’s pretty full on at the moment but I try and get home, chill out with my friends and family

What has been the most important thing you’ve learnt as an artist?

D- I supported Glen Hansard once and said to him after that it was so cool how he creates a musical scene at his gigs and basically have a family of musicians involved and he said “The moment you think it’s important that your name is on the poster, it’s going to be the beginning of the end” which I thought was amazing! He’s been doing it for about 25 years at least and for him to still be so disciplined and know what music is all about was really important to me!

D- I just announced a couple of tours, so we’re gonna be touring from September till nearly November so it’s gonna be pretty hectic! I’m going to fit in a few studio days to try and finish this album! I’m looking forward to the tour but I’m not looking that far ahead right now, I want to get everything finished for my debut album!