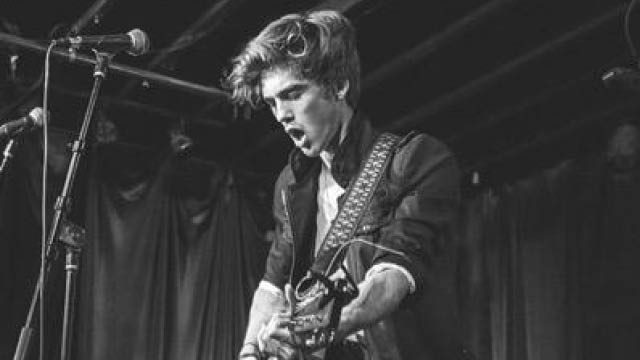 I sat down with Jessarae backstage at the 3Arena in Dublin and talked about his upcoming tour.

Jessarae is a singer-songwriter from California taking the UK by Storm. Jessarae recently toured with 5 Seconds of Summer and will embark on his own headline tour in July.

How did you get started in music?

J- I’ve always loved music, my mum used to be in band and dad is also a hockey player but people always used to ask me why I didn’t end up doing hockey but really I was around my mum a lot more as my dad was always on the road. I remember being taught some of my first cords when I was not even 10 years old. I just started playing and writing songs right away and my parents had me play for their friends.

J- Definitely my family, my dad was a big inspiration for me. My brother is also an inspiration; he’s seven years older than me. I actually think I remember him wanting to get guitar lessons, which was probably one of the reasons I wanted to get them. Musically, I remember catching this guy Damien Rice in concert and it was the first concert I ever went too.

What has it been like touring with 5 Seconds of Summer?

J- it’s been incredible, I’ve been very busy and the coolest part is meeting all the fans. I do this thing where I go out the arena and go busk and play a few songs. Throughout that whole process, just seeing that crowd.

J-  Yeah, I take six deep breaths every show! My band starts my first song without me so I get my cue as soon as they start playing.

J- My Favourite song has to be my first song on my set list which is Stand in the rain. I wrote this just before tour and it was a late addition to the set but it’s one of those songs that have a message and I’m really proud of it. I see people react and it’s one that people can dance too.

J- It depends what you think embarrassing is but actually yesterday I did trip on my guitar cord but I didn’t fall over! My mum from California keeps updated on my tweets after every show and she immediately asked how I was but it’s been pretty seamless the whole time.

J- If I’m going to say on this tour, I said this on stage yesterday that it had to be Dublin. I also like touring in the UK; everyone seems to love music.

If you could perform anywhere in the world, where would you like to go?

J- America is really cool for these outdoor theatres, there’s a place called the great theatre where my buddies R5 played at. I would love to play there.

J- I would love to collaborate with Eminem, I would like to hear his process, he’s just on another planet.

J- Getting quiet time, I’m about to go home in a couple of days! I miss the sunshine and my parents! I also miss my bed.

If you didn’t go in the music business, what would you be doing now?

J- If I completely wasn’t in the music business, I like cooking and drawing! I would of tried to become a chef like a pastry chef or work in some restaurant in Paris or making sandwiches in subway, that’s probably more realistic.

What has been the toughest moment of your career so far?

J- Nothing ever feels like a struggle, I guess there is a certain message within my songs that I would like to be perceived and making sure that the right message comes across. The realisation that there’s a lot that goes into it and so many people want to get into a music career and they think it just happens but really there’s so much more involved. I guess the toughest thing is also having the responsibility of having others around me that also depend on me, so I don’t really have any room to fail! I got really sick in Manchester, I almost lost my voice but I knew I had to perform because I have a band that relies on me and my team, to miss one show is a big deal.

Are you currently working on new music?

J- I’m writing all the time, I’ve been recording in LA leading up to the tour but I haven’t yet recorded whilst on tour but I’m heading back to California to finish and I’m working on some deadlines.

J- The thing I’ve learnt is to enjoy each moment for what it is, It’s very important because every step of the way is a one time thing and this is our last show with 5SOS tonight and when we started the tour, I just want to tour by myself because now it’s just so hectic and so much pressure to do all kind of things. I’ve just learned to take it for what it is and know that everything you have can easily be taken away from you but I’ve learnt to be in control of what you can be and enjoy every moment.

Can you tell me about your upcoming tour in July?

J- Yeah! So before this tour started, I announced that I would be doing my very first  headline tour in July and basically we’re coming back to every city that we’ve done on this tour! We’re playing venues that are a little bit smaller but I think it’s going to be a great opportunity for me to really engage with the fans and also like I said it is my first headline tour so it’s my show, it will be my stage and I will be able to do a much longer set!  This is a very big priority for me, getting ready for it; trying to make it a great experience!

Besides your tour, what are your plans for the rest of the year?

J- I’m not really sure how much I can talk about but basically I’m working on releasing something for the headline tour and then my full focus will go on releasing an album.

You can catch Jessarae on his upcoming UK and Ireland Tour here: