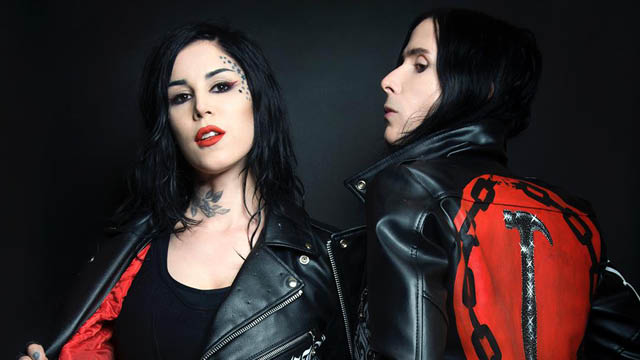 I sat down with Kat Von D and IAMX (formally known as Chris Corner) at the Electric Ballroom in Camden last week. Fans were waiting patiently outside the venue four hours before opening time to see both IAMX and Kat perform live.

C- I’m running this project as IAMX, which is my solo music project! It’s electronic-rock! I’ve been doing this for a while now and I just released an album.

K- I don’t really like the word artist but I create things with my hands, with my mind and with my heart from tattooing, writing books and designing! I play music as well and I’m an animal rights activist

How did you get started in music? Who was your inspiration when you were younger

C- my weird old uncle used to play me strange music at the time and he really bombarded me with this guy called David Sylvian! I didn’t grow up listening to pop music and from an early age I was really interested in experimental music. I think that got me really interested in production

If you could tour the album, where would you go?

K- we’re in London so really Chris should say London So Los Angeles would be your favourite city to play?

C- it is actually! I know a lot of people complain about LA and think LA people are dead inside

C- I’ve had people say that! Maybe they haven’t been getting the right reaction! I love playing in LA; it’s ridiculous and cool! I don’t know if it would be my favourite city but it’s one of them!

K – I’d be happy playing in my living room but one thing I’ve noticed about ever since we’ve done this music thing together is that Chris’s fans are so aggressive in a great way! They’re so hyper and it’s been really neat to see the reaction from different countries and how excited they are for the next stop on the tour! I’ve always been appreciative of that because I think it’s important to be a fan of music!

C- they are beautiful fans for sure!

What can the fans expect from the shows?

K- Really? It’s so strange for people to grab your balls

C- I don’t mind, people get very excited and it’s like the only time I get out the house so it’s basically one big party for me!

Kat you’re well known for creating amazing tattoos and for your cosmetic range and many other things, How did you become involved in the album and I understand tonight this will be the first time you will be performing live in London, how excited are you for this?

K – I’ve been a long time fan of Chris and his music and I do this thing on instagram where I’ll shoot some really interesting looking videos and I like to put music of bands that I really love to inspire other people to listen to bands outside of the box! I’m sick and tired of whatever music is shoved down our throats on a daily basis through the radio! My followers are keen on the music playlists and I had used an IAMX song and Chris got wind of it! We met up in LA at my house to discuss the possibility of working together and I think for both of us It was very important that we had good chemistry and got along because It doesn’t matter how cool you are, if you’re an asshole I don’t want to work with you and lucky for me Chris is awesome! It just made sense to collaborate.

C- Bury yourself, working fucking hard and you have to have an unstoppable drive! You have to care about what you do! If you don’t care, you won’t get anywhere and don’t search for money because It will come if you do what you love!

K- I would just say don’t listen to the dream crushers and don’t listen to anybody who tells you, it’s unrealistic to do something! I think art comes in so many different forms.

What do you both miss about being away from home?

C- still working on that! We both connect on ‘living in the present’ and I know Kat has a business empire that she probably has to plan but I think we both go day-to-day and week-by-week.