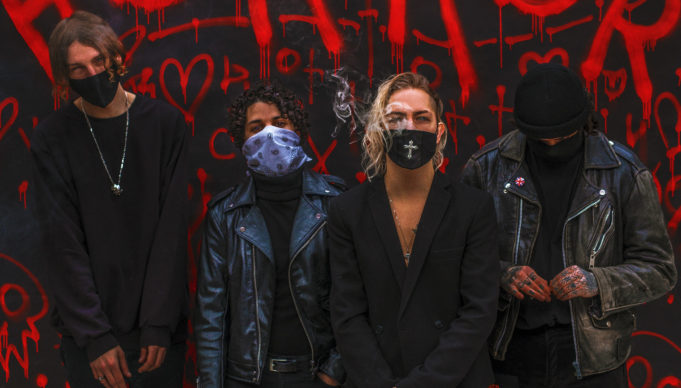 Hertfordshire band, The Hunna, performed at Brixton Academy in London last week finishing up the last few dates of their UK tour.

The quartet has had massive success over the last few years, performing at some of the UK’s biggest festivals and this year they’re back performing on the main stage at Reading and Leeds Festival 2019. Fans can expect to hear fan favourites ‘She’s Casual’, ‘Bonfire’ and ‘We Could Be’. Can you tell me about your album ‘dare’?

R- It’s called ‘Dare’. It’s our second album! It was an album basically about everything that happened to us since we got signed, started touring and started this crazy journey. We called it ‘Dare’ because we thought it was quite a daring album

Since you released the album last year, do you have a different perspective on it? Are there certain songs that have become more important to you since its release or that you see differently?

Jack- There’s definitely not anything we didn’t want on the album or we wouldn’t have done it. We are definitely proud of what we do, whether it’s an old song or new song! Obviously, certain things you look at differently down the line and we’re playing a lot of songs from ‘Dare’ tonight and some old songs! We love them as much as we did when we recorded them. Sometimes songs can eventually mean different things for different people and they can also pick up new meanings down the line as well. We’re stoked on how it went and we’re happy on the release

What is the recording process like for you as a band?

Ryan – With ‘dare’ we literally recorded the whole album in two weeks, which is probably the quickest time for an album to be recorded

Ryan – It’s a really special thing and it’s always really exciting to be in a studio and when you finally get the track down and see it evolve and then see the finished product. It’s always fun

What is your favourite track you’ve written?

Jack –  Personally, I would still go with ‘Bad For You’ because we all love to play it

Junate – I would say the same! That’s definitely up there solid.

Three words to describe your music to someone who hasn’t heard you before?

what has been the strangest thing that’s ever happened at a gig?

Junate – I mean there’s been a few

Ryan – there’s been some crazy things that have happened like our gig like I haven’t seen weird shit but I’ve seen some bad shit, like people being carried out. There were these two girls at our show and they had a full-on fight

Dan- I remember that! it was absolutely crazy. They were front row so we saw it all. She got literally dragged out!

Jack – She was hit mid-song and we were all like woah, what just happened? It was a uni venue where everyone was definitely drinking

What has the fan reaction been like at live shows?

Dan – word for word every song!

Ryan – from 100 songs to dare songs, it’s just been word for word. Absolutely amazing! Everyone is just ready to go. Seeing everyone have fun and forget whatever shit is going on because that’s what music is about

Getting where you are today, what has been the biggest challenge that you had?

Junate – yeah that’s definitely been one of the biggest challenges

Junate – Depends on what habit

Dan – yeah I think we all have some annoying habits

Ryan- yeah Jack is probably the worst for that! He forgot his passport once but he’s never done it again so maybe he’s improving.

Dan – you have got better

Jack – I’m improving for sure

Jack – Bohemian Rhapsody for me! just because it’s the childhood sort of band and I grew up hearing it in the house and when Freddie sings “Nothing really matters to me” and I’m very laid back and nothing really gets to me so I think that would be the theme song of my life

Dan – Nuff said! This is really hard to answer! I’ll go for what Jack said not Queen but my childhood band would be ACDC and the song would be ‘highway to hell’.

What’s next for The Hunna?

Junate – More shows, European tour, a little break and then some festivals like Reading and Leeds which we’re super excited for as we’re gonna be on the main stage! We are also hoping to tour in the states this year

You can catch The Hunna on tour here: thehunna.com