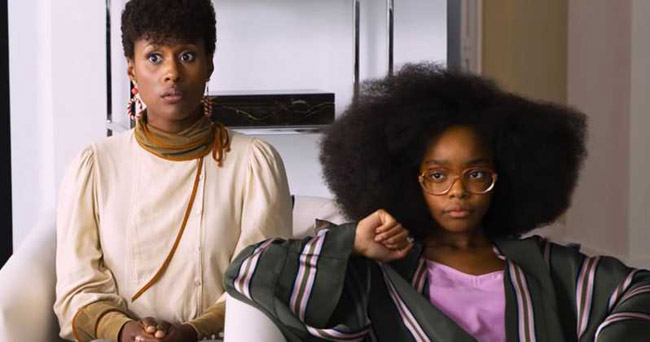 Fundamentally flawed but it has some wicked one-liners that cut close to the PC bone leading to an ultimately timely message.

For anyone thinking isn’t this just Tom Hank’s Big but in reverse, gender-swapped and spruced up for a contemporary feel, you wouldn’t be far wrong. At the tender age of just 13, the film’s star Marsai Martin is the literal brain-child behind the comedy, and yes, Big was her inspiration.

Martin takes on the role of Jordan Sanders, once bullied at school for her nerdy ambition until a humiliating event changed the girl she was forever. Fast forward to the present day, Jordan is now a grown woman (Regina Hall), fierce, successful and the boss of her own company which she runs with an iron rod and a sharp tongue. Mean to everyone that crosses her path, she soon crosses the wrong child, who with a magical wand casts a spell to make Jordan a child again.

Jordan, now her 13 year-old self again but still full of her grown woman attitude, reluctantly looks to her die-hard and down-trodden assistant April (Issa Rae) to act as her guardian, forced back into the school she used to go to and back into the outcast circle, she has to learn a few lessons if she is to ever return to her adult self.

Now the concept of the film may be pretty old hat, we’ve seen it time and again, it’s flawed. There is no clear direction as to who should be the overall winner, but its message is crystal and timely. In the world of social media where real-life is hidden behind a screen in favour of what society now deems to be acceptable, its message clearly sings the mantra of be who you are, not what’s expected to be socially acceptable.

Issa Rae, by far, is the standout star, as Jordan’s timid assistant, April she endures a limitless amount of bullying from her boss but ultimately she is too scared to pitch her own ideas for a gaming app that could potentially save Jordan’s company in her absence.  She gets her time to shine with some brilliant one-liners that will have you belly laughing to the pit of your stomach. She’s an advocate for spanking unruly, rude and spoiled children as we find out during her “Black Mama Whooping” moment, and she is more than hilariously thirsty when it comes to fine looking men.

Co-written and directed by Tina Gordon the comedy is fairly generic and fundamentally flawed but if you don’t look too deep and just go with entertainment it has more than its fair share of fun unless you were born without a sense of humour.