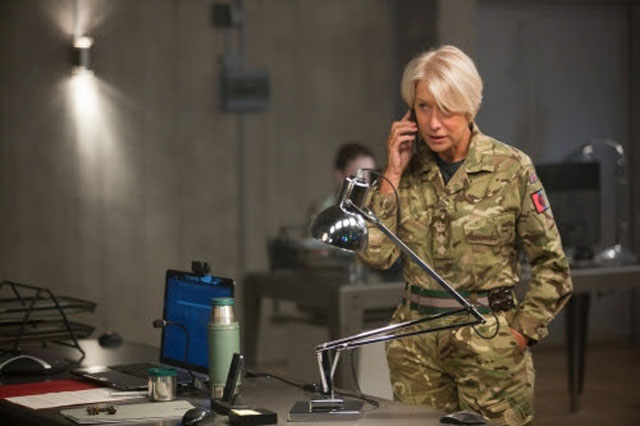 With Helen Mirren taking the Helm as Colonel Katherine Powell, Eye in the Sky delivers a gripping and suspense filled story of modern day drone warfare which touches on the conscience of our government, giving the director, Gavin Hood a much needed booster after his 2007 headache inducing Rendition.

Hood has kept Eye in the Sky pretty simply by keeping locations to a bare minimum but packed in a whole host of thrilling suspense that will keep you fully engaged and on the edge of your seat throughout every last second. Key members of the al-Shabaab terrorist group have been identified and tracked to a meeting which unearths a shocking turn of events. The main question now is when exactly they launch the drone to take out the evil in order to keep the collateral damage down. We watch the drama unfold from just four key characters, Helen Mirren, who is a no-nonsense, hard-nosed colonel whose main objective is to take out the suspects no matter what the cost. Alan Rickman, in possible his last role, as a lieutenant in a London office with Government officials all debating and no one making a decision on what their next move should be. Tempers flare but no one is willing to make that final call ‘we’re referring it up’ are the words used on numerous occasions. Aaron Paul is sat in the hot seat, ready to unleash the drone in which could stop another suicide bomb attack but he has an attack of conscience which delays the whole situation. Lastly, we have the man on the ground, Barkhad Abdi (who was nominated for an Oscar for his performance in Captain Phillips) placed outside the house, willing to cause a distraction in order for the mission to be completed.

There is no build up or back story present here and it isn’t needed. The story is here and now, all based on one stress riddled day. One in which we see people fighting their moral judgement to make that life or death call. We get to know the characters from the personalities and emotions they convey during this intense situation, and considering Eye in the Sky is dialogue heavy, through performances alone this thriller captivates. The refreshing part of this story is for once we aren’t forced to endure the political views or agendas of any one person or Government which always comes hand in hand with films of this subject. Decisions are made on cold hard facts and intelligence carefully obtained even if a little tweaked in order to get the job done. The intensity of the moral dilemma which they all face is nicely broken down with an elegant touch of humour, yes delivered by our beloved Alan Rickman with his deadpan serious face never taking away from the seriousness of the situation at hand.

Eye in the Sky is out in UK Cinemas April 15.