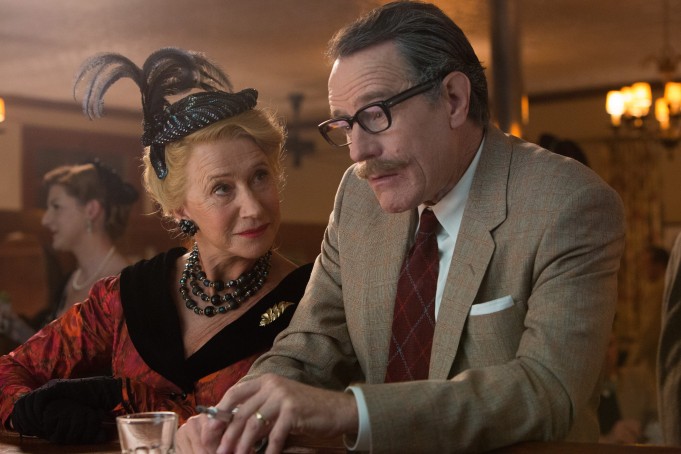 For any cinephile, the name Dalton Trumbo should be no stranger.  For those who don’t know, Dalton Trumbo was a 1940’s prolific and legendary Hollywood screenwriter who was responsible for the likes of Roman holiday, Spartacus and Exodus. He was also known for his strong political stance and very publicly known as a communist.

As we know, being a communist in America and especially at the height of Trumbo’s career was like showing a red rag to a bull and this is where this biographical picture starts. Trumbo (played by Bryan Cranston) is considered as being an elite member of the Hollywood set. After signing a contract with MGM, making him the highest paid screenwriter of their time, he decides to risk his career when he, alongside 10 other Hollywood screenwriters were subpoenaed to testify in front of the United States congress about the communist propaganda in the times Hollywood films. He along with the other 9 refuse to answer their questions which see’s them in contempt of court. Unfortunately for them and their belief that a liberal supreme court (which was replaced just before their trail) the men were sentenced to jail with Trumbo serving 11 months. Upon release from jail, Trumbo along with many of his fellow liberal screenwriters and actors were placed on a blacklist which saw all of them struggle with unemployment. No one would hire them. This being aided by the two-faced, charming one minute and full of vile hatred the next, legendary gossip columnist Hedda Hopper (Helen Mirren) and her little group of henchmen which was headed up a by senseless and stupid John Wayne (David James Elliott).

In order to make money to survive they take on work for independent filmmakers, using pseudonyms and churn out piles of rubbish, mostly for King Brothers (which is fronted by a very funny John Goodman) until the Gregory Peck and Audrey Hepburn movie Roman Holiday won it’s Oscar (which Trumbo wasn’t credited with until 2011). The rumours are rife in the Hollywood mill that Trumbo wrote this film and with a very determined Kirk Douglas, played convincingly by The Hobbit actor Dean O’Gorman to get him onboard to re-write Spartacus and Director Otto Preminger to write Exodus with both standing behind him to give him his name on the credits which eventually leads to the breakdown of the blacklist. Thanks to the writing of John McNamara, Trumbo isn’t too heavy on its political deliverance as it’s laced with numerous chuckles, mostly coming in the form of Trumbo’s eccentricities, which see’s him at his highest creative flow in the bath and his speech roll’s of the tongue as though everything he says is him trying to make a statement.  An exceptional cast play their roles to the highest form of believability building that connection with the audience and each individual character.