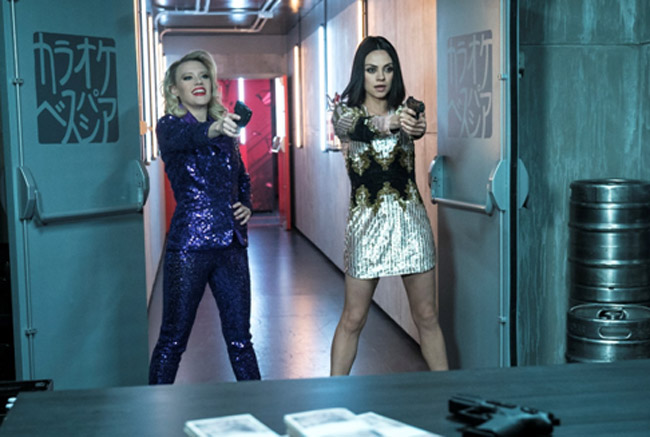 There are times in life where you realise that all you really need in life is your BFF.

In The Spy Who Dumped Me, Mila Kunis and Kate McKinnon star as two best friends who are unexpectedly thrown into a world of international espionage. Out of their depth, the pair finds that the only thing they can depend on is each other. To celebrate the home entertainment release of The Spy Who Dumped Me, available on Digital Download now and on DVD, Blu-ray™ & 4K UHD from 26th December, we’re taking a look at our favourite female partners in crime.

In The Heat, Sandra Bullock stars as Ashburn, an FBI agent and gets sent to Boston to uncover a drug lord and works alongside a Boston Police Officer, Mullins (Melissa McCarthy). Bullock and McCarthy’s characters are complete opposites but throughout the film, they work together and become a truly dynamic duo in order to catch an all-powerful drug lord. There’s nothing we love more than seeing two great female comedy stars with fantastic chemistry – and that’s exactly what you get here. Gilmore Girls revolves around a single mother Lorelai Gilmore (Lauren Graham) and her daughter Rory Gilmore (Alexis Bledel). Based in Stars Hollow, the show focuses on the highs and lows of their relationship as they navigate through life together. Acting more like best friends than parent and daughter, Lorelai and Rory prove that although men may come and go, it’s friendships that really stick. Gossip Girl centres on a group of high-society Manhattanites throughout their time at an elite private school through to adulthood. Much of the show focuses on best friends-slash-frenemies Serena (Blake Lively) and Blair (Leighton Meester) and their adventures around the city. From dealing with boys, friendships, families, and even fights with each other, Serena and Blair stick together through it all as BFFs. Clueless follows high school students Cher (Alicia Silverstone) and Dionne (Stacey Dash) and their experiences living in Beverley Hills, California. As best friends, they help a new girl at school improve her style and look with a pretty incredible 90s makeover. With incredible comedic chemistry and wardrobes to die for, Cher and Dionne are the pair we all spent the late ‘90s wanting to be. Thelma & Louise is a film about best friends Thelma (Genna Davis) and Louise (Susan Sarandon) who plan a weekend vacation to a friend’s secluded cabin. Although the pair appears to be complete opposites, they use their friendship as an escape from dead-end jobs and relationship troubles. As their trip takes a shocking turn for the worst, the best friends must figure out a plan of escape.

Audrey & Morgan – The Spy Who Dumped Me The Spy Who Dumped Me follows Audrey (Mila Kunis) and Morgan (Kate McKinnon), two thirty-something BFFs who are left reeling when Audrey gets dumped – then finds out her ex-boyfriend (Justin Theroux) is actually a spy. The Spy Who Dumped Me is a real celebration of female friendship – and it’s pretty hilarious.

Take a sneak look at the hilarious outtakes below.

The Spy Who Dumped Me is available on Digital Download now and on DVD, Blu-ray™ & 4K UHD from 26th December.