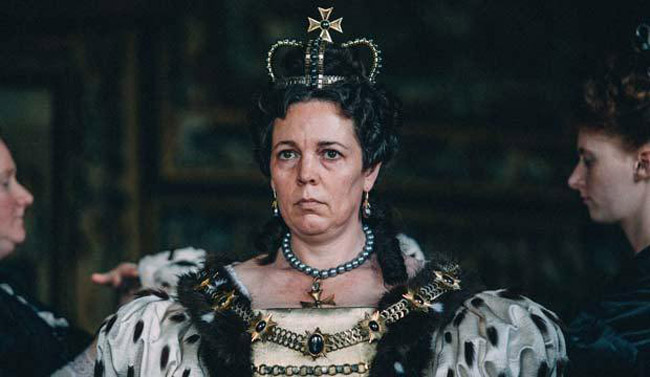 Olivia Colman puts in an award-winning performance in this hilarious bat-shit crazy picture which is by far Lanthimos at his uninhabited finest.

Not one to stick to the norm, Greek filmmaker Yorgos Lanthimos follow’s up the cold and muted territory of The Killing of a Sacred Deer with a step back in time to the Royal Court of Queen Anne. A Comedy with a twist of tragedy, it takes on a life of devious social climbing with the most outrageous and sublime female ensemble.

Set in 18th Century England, Olivia Colman sits on the golden throne as Queen Anne presiding over the political backbiting of her Government.  Anne is a deeply depressed ruler with unstable childlike mental issues. Having lost all of her Children, she surrounds herself with Rabbits as a substitute for her lack of offspring. Never confident in her decision making, she keeps Sarah (Rachel Weisz) close at hand to act as Queen by-proxy and to also provide her with carnal companionship.

As the pair seems almost inseparable, Emma Stone’s Abigail enters the fold. A cousin of Sarah’s whose family has fallen on hard times, she comes to Court, covered in mud and looking the worse for wear, cap in hand to Sarah looking for a job. Out of nothing but pity, Sarah set’s her to work in the kitchen’s but as Sarah’s own ambitions make her lose focus on her special relationship with the Queen, Abigail set’s to work on her own ambitious advancement.

With the Queen’s ear always open to Sarah’s suggestions, Anne dabbles with the idea of raising taxes to fund the latest war with France. A war in which Sarah’s husband, the Duke of Marlborough (Mark Gatiss) has a vested interest. However, not everyone in the political playground thinks the idea of raising taxes is such a good idea; enter Nicholas Hoult’s curly wigged, priggish Robert Harley to raise a troublesome drawbridge on the very notion by employing Abigail to his ranks.

Lanthimos’s The Favourite is far from your typical dramedy, its steely and cutting and makes essential use of the obtuse swear word enough to turn the air blue. The script whilst remaining familiar enters a universe of absurdity in building its overzealous, memorable characters with vulgar regency. It remains’ cleverly written from start to finish with panoramic camera shots widening the setting in order to drink in every last mortal of detail.

Performance wise, you just can’t get any better than Olivia Colman’s mood-swinging cantankerous, yet childlike persona. The need for love and affection is swatted away in the blink of an eye to reveal a cold and cruel woman who doesn’t think twice in cutting you in half with her icy jabs. Weisz is understatedly brilliant as the steely Sarah. She is powerful and she knows just how to use it. Whether she is overstepping her station, whether through physical violence towards Abigail or even in how she treats Queen Anne, she gets away with it by exuding fear amongst others.

A visual feast for a tempestuous Queen, Olivia Colman puts in an award-winning performance in this hilarious bat-shit crazy picture which is by far Lanthimos at his uninhabited finest.

The Favourite is out in cinemas January 1st.