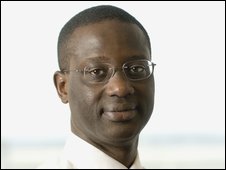 Tidjane Thiam will become chief executive of Prudential in October, becoming the first black head of a FTSE 100 company.

Mr Thiam joined Prudential from Aviva in 2007 and is now finance director at the firm. He will replace Mark Tucker.

Originally from the Ivory Coast, Mr Thiam had previously been the country’s Minister of Planning and Development. Mr Thiam will be one of a limited number of ethnic minorities who are represented in the UK’s boardrooms. To read the rest of the story click here.