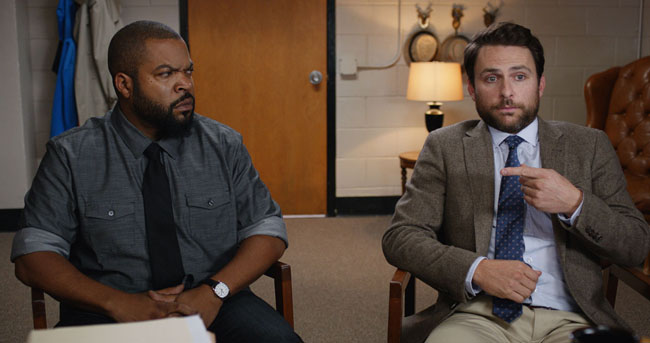 Friday the 3rd of March see’s the release of the comedy, Fist Fight into UK cinemas. Starring both Charlie Day and Ice Cube as teachers ready to take it back to the playground.

To honour the release Charlie Day and Ice Cube took some time out to talk about the film, their characters and working with director Richie Keen who makes his feature film directorial debut with Fist Fight.

Ice Cube (“Barbershop: The Next Cut,” the “Ride Along” movies) and Charlie Day (“Horrible Bosses,” “It’s Always Sunny in Philadelphia”) star as high school teachers prepared to solve their differences the hard way in the comedy “Fist Fight,” directed by Richie Keen (“It’s Always Sunny in Philadelphia”).
On the last day of the school year, mild-mannered high school English teacher Andy Campbell (Day) is trying his best to keep it together amidst outrageous senior pranks, a dysfunctional administration and budget cuts that are putting his job on the line just as his wife is expecting their second baby.
But things go from bad to worse when Campbell crosses the school’s toughest and most feared teacher, Ron Strickland (Ice Cube), causing Strickland to be fired. To Campbell’s shock—not to mention utter terror—Strickland responds by challenging him to a fist fight after school. News of the fight spreads like wildfire as Campbell takes ever more desperate measures to avoid getting the crap beaten out of him. But if he actually shows up and throws down, it may end up being the very thing this school, and Andy Campbell needed.
“Fist Fight” also stars Tracy Morgan (“30 Rock”), Jillian Bell (“22 Jump Street”), Dean Norris (“Breaking Bad”), Christina Hendricks (“Mad Men”), Dennis Haysbert (“The Unit”), JoAnna Garcia Swisher (“The Astronaut Wives Club”) and Kumail Nanjiani (“Silicon Valley”). The cast also includes an ensemble of young actors, including twins Charlie Carver and Max Carver (“Desperate Housewives,” “Teen Wolf”), Austin Zajur in his major feature film debut, and Alexa Nisenson (“Middle School: The Worst Years of My Life”).
Fist Fight is released in cinemas on March 3