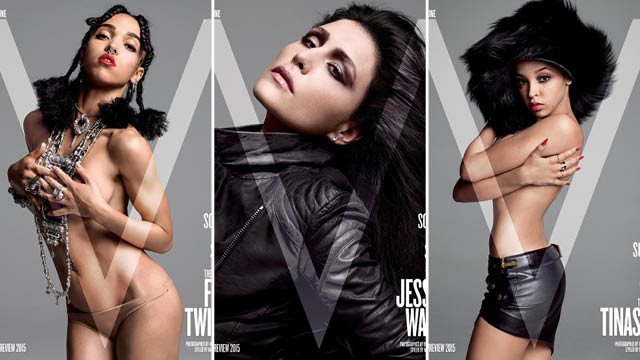 FKA Twigs and Tinashe both went topless for their cover shoot with V Magazine, however Jessie Ware the third part of the spring preview 2015 issue of V Magazine simply wears a leather jacket.

The issue heralds the new sound of soul with its new covers featuring FKA Twigs, Jessie Ware, Tinashe and Sam Smith all photographed by Inez & Vinoodh. FKA Twigs poses topless with nude colored underwear for her image while Tinashe shows off a fur hat and leather skirt look.

You may remember our previous article called ‘Find out why everyone is talking about Tinashe‘ where are music journalist Joe Waller gave us the breakdown on this stunner and FKA Twigs also headed up our Future Flavours bringing it fresh for November.

What do you think of the cover photos? Leave your comments below