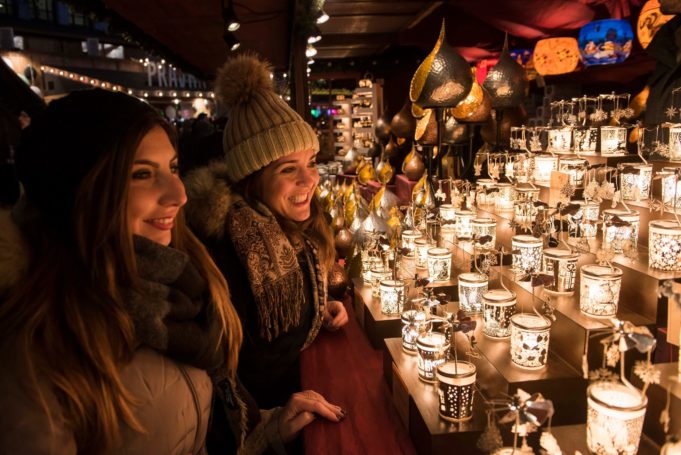 Underbelly has announced their third season of festive events in the very heart of London: Christmas in Leicester Square 2018-19.

Briefs the legendary godfathers of ‘Boylesque’ are this year’s headliners with their first ever UK Christmas show: adding tinsel and jingle bells to the glitter-and-neon anarchy of their unique drag-cabaret-circus extravaganza Close Encounters. (9 Nov – 3 Jan) Fellow Underbelly legends Frisky & Mannish will also be presenting their first ever Christmas show after a sold-out 10th anniversary special on the Southbank this summer, giving all your favourite Christmas songs a hilarious makeover in some of the most spectacularly festive costumes ever to grace the Spiegeltent. (17 December)

Other shows just announced include an extravaganza from the world’s only drag tribute to Girls Aloud, Gals Aloud (20 Nov & 5 Jan), masters of their art House of Burlesque with The Burlesque Carol Concert (27 Nov & 4 Dec) and one of the breakout stars of the Edinburgh Fringe, the beautiful and statuesque (7ft to be precise) Drag Queen Gingzilla (11 Dec).

The incomparable Showstoppers are also back with their acclaimed Christmas Kids Show – a totally improvised musical for all the family: Batman meets Hermione Granger at the North Pole? Peppa Pig joins Father Christmas on his sleigh? Dora explores outer space with Captain Underpants and creates magical carols? Just shout it out and The Showstoppers will bring it to life in front of your eyes. (Selected dates 2-30 December)

For the tots, Monski Mouse’s Christmas Baby Disco will get parents, babies and younger kids alike bopping along to a special mix of Christmas classics and kids and dance favourites: the perfect place for a first Christmas dance. (17-19 December)

In January, blowing away the new year cobwebs, there’s Shakespearience: a bedazzling swagger through the Bard’s greatest works for all the family and the perfect introduction to some of the greatest theatre in the English language. (2-5 January)

Another hit with the kids, returning after huge success last year, is Santa’s Grotto – open every day until Christmas Eve. This special North Pole experience will see Father Christmas himself (the real one!) regale kids with a special festive tale before hearing their Christmas wishes, having a photo with them, and giving them a special early Christmas present. Winter Windows will also return – a unique exhibition in partnership with local schools which will see pupils design stained glass windows with the best being exhibited around the north and west perimeter of the Leicester Square site for thousands of passers-by to enjoy.

In addition to this amazing seasonal entertainment, London’s home of entertainment Leicester Square will be transformed into a wintery haven with a beautiful European-style Christmas Market with over 25 different stalls featuring a range of fascinating Christmas curios, sumptuous food and delicious drinks.