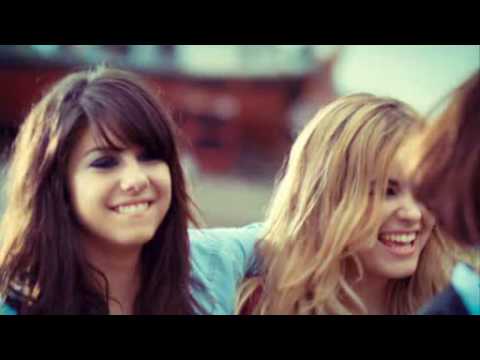 What do you get if you fuse together Girls Aloud, The Saturdays and the Sugababes and then throw in a bit more grit and an urban edge? I’ll give you the answer; it’s Girls Can’t Catch – the new girl group about to give the UK pop scene a good-old shake up. The group consists of Daizy (left), Phoebe (middle) and Jess (right) and they are living proof that raw talent, a little luck and a lot of perseverance can always see you through and that chasing your destiny is something we should all do, no matter what life throws at us. Currently supporting Girls Aloud on their UK tour, Flavour caught up with the GCC girls as their tour hit the north in Edinburgh.


What would you say you bring to the UK music scene that’s currently missing from it?
Daizy: We are another girl band and you can never have too many of them, but because we are slightly different to The Saturdays and Girls Aloud, we will hopefully appeal to a different kind of audience and just bring back pop with a grittier edge.

How long ago have you all been together in GCC?
Jess: We have been together since the beginning of the year. Our record label formed The Saturdays and said they wanted to put a new girl band together. We went straight on tour with Girls Aloud and we have been working ever since, doing our album and promoting the single (Keep Your Head Up) and it’s been really fun.

You have got quite soulful voices – I’m assuming you’re soul fans. But what sort of music shaped you when you were growing up?
Daizy: I loved Hip Hop and R&B.
Phoebe: I was brought up on The Jackson 5, so Michael Jackson’s passing was really sad for me. Motown has really influenced my life in a big way through the years.
Jess: I loved R&B and I used to actually be a part of a gospel choir.

You have all been doing your solo thing in the music business for a while now. Phoebe, I know you were lead singer in Hope from The X Factor. What was it that made you keep chasing your destiny even after being eventually knocked out of the show?
Phoebe: When I was knocked out we got a really good manager and he got us on the Boyzone and Westlife tour and he even got us to record a song with Pharrell Williams and that was what kept us going really. There is only a certain amount of times you can try to get a record deal and then it gets to the point where you don’t give up, but you just know it’s not going to happen. Then I got a call for this new girl band and it saved me. If I wasn’t in this girl band, I would still be out there, trying to make it.

I know that Jess won a Rockstar competition and got the golden opportunity to fly to NY and record with Alicia Key’s producer. Wow! So what was that like for you?
Jess: It was really amazing, he was really talented. He has become a really big inspiration for me and it’s really nice that he even keeps in contact with me now.

And I know that Daizy won Hugo Urban Rules in 2006. Tell me a little bit about how winning that competition has helped you get to where you are today?
Daizy: It was another stepping stone for me, a way of getting my name out there. My mum said to me there’s no way you are going to win this urban competition and I was like ‘Yes I am!’ and I did. I’ve still had to do a lot myself to get where I am now.

What does the rest of this year have in store for you?
Lots more work, really. We’ve got the single release which is going to be really exciting, straight after that we’re supporting The Saturdays at the iTunes festival, and just lots more promotion. We have got a very busy diary in the next six months!

What’s your last word as a group for aspiring music artists?
Daizy: Be very persistent and always believe in yourself no matter what.