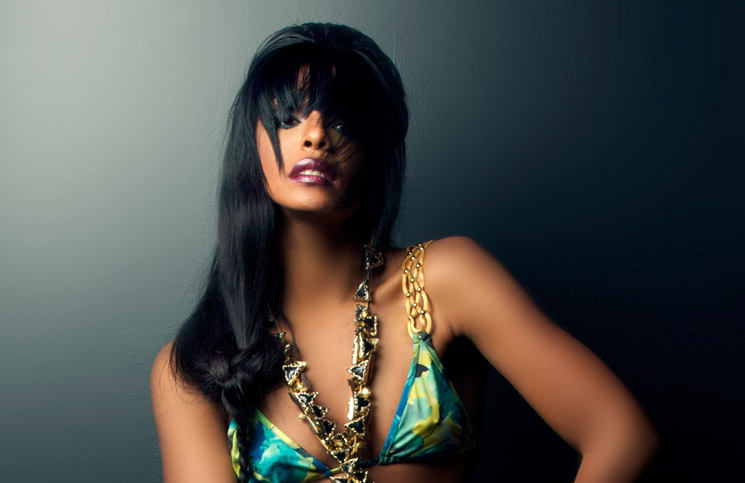 It has been just a little over a year since, platinum selling artist, Dawn Richard last stepped onto UK soil when she was here promoting her hugely successful independent debut album Goldenheart. Last year while in the UK Dawn took to the stage as headliner for our very own Flavourmag Live event and dropped Bombs with an explosive performance that we will never forget. Since then so much has changed for Dawn and Flavourmag’s Joe Waller caught up with the singer/songwriter to discuss the highly anticipated Danity Kane reunion, Goldenheart’s success and what’s in store for 2014.

Hi Dawn, How are you?
I’m amazing

Your last visit to the UK was at the beginning of last year where you was here promoting your first independent solo album, Goldenheart. What did you think of the UK?
I love the UK. Such a chill vibe. Full of fashion and FLAVOUR.

Goldenheart sold 30,000 copies to date and received universal acclaim from many music critics. This was a big response for an Independent release. Were you surprised by the success and recognition that Goldenheart received?
Absolutely. I mean you hope that people love your art. You put yourself out there and then risk and hope people f**k with you. Top ten in Billboard and number one on iTunes was that moment for me.

Some say that Goldenheart, with its edgy beats and percussive sounds, may have been released before it’s time. What are your thoughts on this?
Ahead of the game is always right on time for me. Forward keeps you first. Goldenheart was Dawns first independent solo album. It is the first in a planned trilogy of albums to come from Richard about Love, Loss and Redemption. Albums to follow are Blackheart and Redemptionheart.

2013 came to an end with a surprise turn that left the hearts and general public sitting on the edge of their chairs. Danity Kane announced their reunion and made their first public appearance together in 6 years at the MTV VMA’s. How did this come about?
It was time to mend old wounds and finish incomplete chapters. Crazy timing for me because I had the second part of my trilogy ready to go. I wanted to right some wrongs from the past and fill a void that’s been missing in music. No girl groups have been on the map since our era. They are just now coming back.

Danity Kane was originally put together by Diddy on MTV’s reality show Making The Band 3. After Danity Kane’s split, you was the only member who continued to work with Diddy and moved onto your next project as a member of Diddy Dirty Money. Have you spoken to Diddy since Danity Kane announced their reform? Have any of the other girls spoke with him?
I will always love Puff. He is always a brother to me who exposed me to his music game.

When the world was first introduced to Danity Kane it was a five member group. D.Woods is now absent from the reunion and new line up. How did this happen?
This question has been asked so much and misconstrued so many ways. Let’s not touch this one anymore.

At the end of last year Danity Kane took to the stage for the first time together in 6 years. The DKLA show at The House Of Blues was a huge sold out success. How was that night for you and the girls?
We sold out in a day. That proved to us we weren’t forgotten. Best feeling to know your fans still love you. We were humbled and so excited. That nervous feeling to be perfect crept back in us. We owe it all to our fans. Our army. The show consisted of many DK classics, fan favourites and old joints from both platinum albums. One track however got its first live debut on the night, All In A Days Work. What has the response been like to the track?
Man, the fans love it! Which is interesting because that’s not even our first single. We wanted to give more but everything we have is so good we haven’t picked our single yet. We are happy that they love it though. It means they will love the rest.

We also got to hear the first recorded track from Danity Kane’s new 4 piece line up, Bye Baby. What has the response been like to the track?
Man! That record got leaked and we were upset. But then we saw the response and it kind of became a double edged sword situation. I mean they are playing this song on the radio all over the US and we didn’t even want the world to hear it yet. It’s not even mixed. What this means to me is that if our fans love the songs that aren’t even mixed or our singles then they are in for a treat. We have alot of amazing work.

We understand that you girls are currently hard at work recording and finalising your album, but do you guys have any idea of a release date yet?
Soon. People have been really patient with us. We know that they are getting anxious but we have a layout coming. We want to leave a mark with this run. We’re coming. And playing no games.

We have heard that Danity Kane have cameras following and documenting the come back. We will be seeing a brand new reality show any time soon?
*smiling* Can you give us a Flavourmag, Danity Kane EXCLUSIVE?
We are in talks with labels as of right now. Danity Kane where a five piece all girl group put together by Sean “Diddy” Combs on the very popular MTV reality show Making The Band 3 in 2006. Danity Kane went on to release two platinum albums before dismantling on our television screens in 2008. The girls have now reformed as 4 piece and are set to release brand new music, with a brand new album in the works for 2014.

Of course the reunion of Danity Kane has taken priority at the moment and Blackheart (Dawns second independent solo album) has been put on hold. Will the hearts eventually get Blackheart and do you have any dates in mind for its release yet?
I would never leave my hearts. Ever. And because they have been patient with my decisions I have some hear for them. They will not be disappointed. Blackheart will come right after DK.

You continue to release free music to the hearts all the time. Why do you think this is important?
Because the hearts deserve it. They are my lifeline. We are the misfits and crazies that people don’t understand. We need music to free us. To send us to out true place. Out escape. If I can give that to the hearts everyday I would.

Who inspires you musically at the moment?
No one inspires musically. I’m living in silence a lot right now. Learning from field music. From nature. It’s extremely stimulating.

We all know you are a very talented songwriter. Who would you love to write a song with?
Digging Daughter and Warpaint. Would love to work with them.

Which artist would you love to collaborate on a track with? Dead or Alive.
I really love Kanye. I’d love to produce and write a record with him. His mind is a compacted gem.

What does 2014 hold for Dawn Richard?
Stillness.

Can you give us a Flavourmag, Dawn Richard EXCLUSIVE?
I’m not really human. I’m a liger.

If you don’t know about Dawn then you really should. Add Goldenheart to your music collection and you will not be disappointed.

Here at Flavourmag we are excited for the Danity Kane reunion and can not wait to see what the girls have in store for us. Let us know your thoughts and make sure you follow Dawn, Danity Kane and Flavourmag on twitter – @DawnRichard / @DanityKane / @Flavourmag