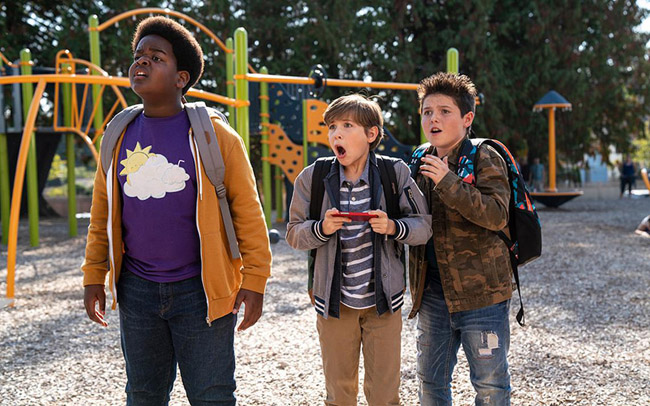 In all its r-rated glory, there is simple pureness of innocence hidden in plain sight.

When describing Good Boys, a tween Superbad wouldn’t be too far off the mark. What will come as no surprise is the r-rated swear-fest comes from the men behind said film and who also brought you the likes of Sausage Party and Pineapple Express, Seth Rogen and Evan Goldberg, resulting in a repetitive yet charmingly hilarious coming-of-age caper?

The film centres on preteen’s Max (Jacob Tremblay), Thor (Brady Noon) and Lucas (Keith L Williams) or as they like to be known The Bean Bag Boys, all very different, but essentially good at heart and bros for life. While Max gets his first feelings for a girl at school, Thor thinks he’s a bit of a bad boy and Lucas is the moral pillar of the group. When Max fall’s in with the cool crowd and nabs himself an invite to a kissing party he realises he’s in big trouble as he’s never kissed a girl before and so the calamity riddled quest to learn ensues after stealing his father’s drone to spy on his teen female neighbour. The girl and her best friend (Molly Gordon and Midori Francis) subsequently take possession of the drone in order to blackmail the boys who end up with the girl’s bottle of pills, a bottle that contains MDMA. In turn, ends up in a hilarious game of cat and mouse.

William’s Lucas has got to be the stand out by standing on the moral high ground from standing up to bullies and his staunch views on drugs. On finding out the boys are in possession of drugs he loses his cool and rants “you made us bring drugs to a kid’s playground’. He could easily front his own ‘Just Say No’ campaign.

Ultimately, it’s these three different characters and their friendship that is the sweetest thing. Every child at that age thinks the friendships they have at that age will last for a lifetime, but as the three boys personalities grow and vie of in different directions crack’s appear and ‘bean bag boys for life’ may just not quite be a thing.

In all its r-rated glory, there is simple pureness of innocence hidden in plain-sight to embolden. Just like its three young characters, the mischievous cheekiness is hilariously adorable.

Good Boys is out in cinemas August 16th