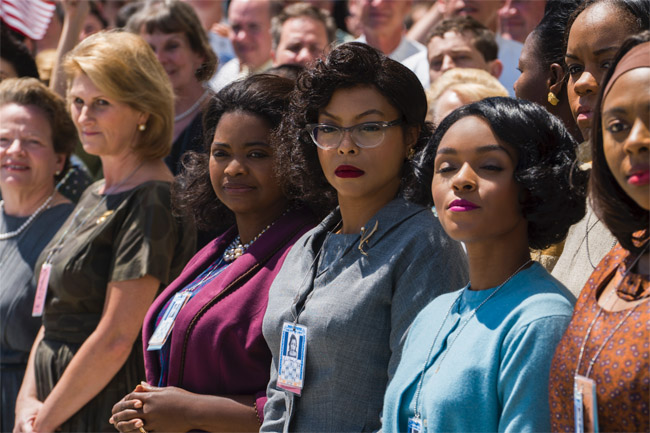 Whilst most may be aware of the role of importance men played in sending a man into space to lay his feet firmly on the moon, not so many know of the tremendous work of the African-American Women who played an equally important role in achieving it. Hidden Figures delves, with a delicate touch, into the story of three such women.

Have no mistake, Hidden Figures is pure Hollywood entertainment, it may lie its foundations on the true story of three incredible women, who in a time of blatant racism and prejudice defied the odds to gain the respect and acknowledgement of those who ran Nasa. Although prejudice and superiority are rife, there is no real hatred shown here, which would have been widespread back in the era this story played out. There is no hard line gritty backbone but instead, a watered down completely feel-good sassiness made to empower and inspire young women against the odds and entertain the masses.

The story centres on Katherine Johnson (Taraji P. Henson), a mathematical genius whose role as a human “computer” sees her promoted on to the team of the Space Task Group – a group whose job it is to compute the exact figures and coordinates to successfully launch the rocket with John Glenn into space. We are also privy to a bit of romance just to add that little bit extra sugar, with a side order that consists of how Johnson meet and fell in love with her husband played by SAG winner, Mahershala Ali – who won his award for Moonlight.

Next up we have Dorothy Vaughan (Octavia Spencer) – who put Johnson forward for the position – in a role that sees her supervising a group of black women at Nasa, in computing but neither receives the title of supervisor or the wage that comes with it. She constantly comes up against the brick wall of her snotty white colleague, played by Kirsten Dunst in an effort to obtain the official status for a job she is already carrying out. By sheer chance, she comes to realise how computers are the future and has the insight to self-train herself and subsequently her team.

Finally, we have Mary Jackson, played by singer Janelle Monáe, the feisty, sexy one with a love of engineering. However, to obtain her dream of becoming the first female black engineer at Nasa she first has to lobby the local judge just so she can attend a segregated night school to obtain the qualifications she needs to apply for the position.

With a soundtrack quite obviously put in place by Pharrell Williams, an air of joviality encompasses the picture, especially with the film’s running joke when Johnson, every time she needs to use the ladies, picks up her books and has to make the 40 minute journey – running so daintily – to and from the only ‘Coloured Women’ toilets on campus. The situation causes infuriating consequences for her boss Al Harrison (Kevin Costner) – who doesn’t see colour but only numbers – who takes a sledgehammer to the ‘coloureds only’ sign and smashes it down; however the rest of her team aren’t so accommodating including that of The Big Bang Theories Jim Parsons, this along with Dunst’s role is where the script lacks ingenuity.

Director Theodore Malfi has projected the pure and utter brilliance of its three protagonists with subtle nuance, each perfectly different but all as one when it comes to the sheer determination and hard working spirit these ladies so deservedly should be honoured for. It’s only failings are the water-downed script, which has probably come at the hands of the studio rather than any of the creative’s on the screenwriting team.