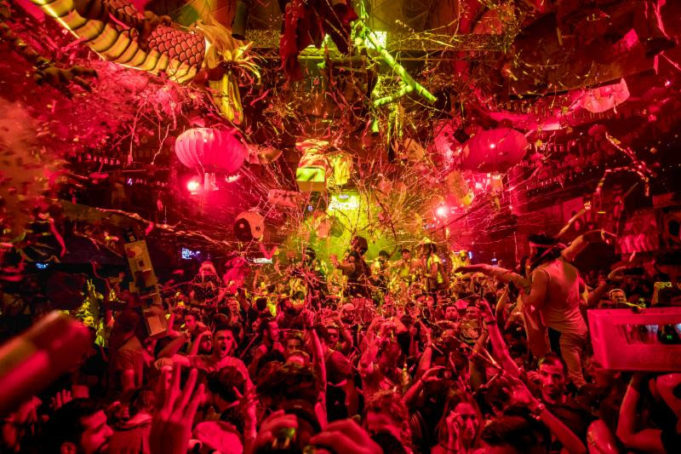 For those of you who are ahead of the game, you can start buying early bird discounted tickets for you and your friends to have an amazing time partying the nights away during Christmas and New Year.

It’s time to get festive, it’s time to dress up and make the most of the end of the year, it’s time to take a look at our Hotlist of the best Christmas & New Years parties and raves in London. For those of you that love to dress up in sequins, tassels and glitter, it doesn’t get much better than Glitterfest’s Boxing Day Masquerade Glitterball. Glitterfest will be transforming the Tropicana Beach Club in a winter wonderland for Christmas. Expect confetti cannons, balloon drops, crazy circus acts and most importantly FREE glitter & gem makeup for all attendees. Following the announcement of their expansion to two days, Junction 2 will be bringing some of their biggest names to Tobacco Dock for a celebratory launch party. With Adam Beyer bringing his driving techno selections to the intimate Car Park space, as well as a UK debut B2B by Âme and Rødhåd, and a very special extended set from the one and only Dixon, LWE have ensured an unforgettable experience. Get tickets here For their final night of 2018, fabric invites a host of esteemed party specialists to round out the year. Leading the proceedings in Room One is Patrick Topping, whose distinctive style of floor-inclined house has brought him huge success in recent years. He’s joined by a special guest – more info on this will be revealed soon. wAFF also makes a return to the space, bringing the definitive tech house sound that’s made him one of today’s best-loved DJs. In Room Two, a very special guest will be heading up proceedings. Full details are yet to be revealed. Anastasia Kristensen also returns, bringing her distinctive mixing style that puts a refreshed edge on the sounds of vintage techno and IDM. Get tickets for Fabric NYE now Twisted Circus is back at the 02 Forum for New Year’s Eve… This madhouse of overflowing fun, style and charisma is definitely one for your New Year’s Eve calendar. Gather your friends and book your tickets now. On Monday 31st December and following a milestone year for the London festival which saw them celebrate their 15th anniversary, South West Four is set to cap-off 2018 with a huge New Year’s Eve party at O2 Academy Brixton. The bill sees UK garage collective So Solid Crew mark 20 years in the game, whilst other acts include My Nu Leng, Redlight & Noisia. Get your tickets now