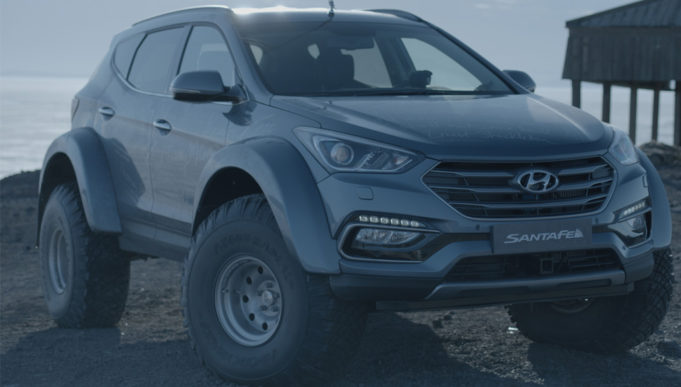 The brand spanking new Hyundai Santa Fe becomes the first car to travel across the Antarctic.

On a treacherous 30 day expedition completed by Patrick Bergel across the coldest & driest continent on earth, the Hyundai Santa Fe and Bergel and his team complete a journey inspired by Bergel’s great grandfather Ernest Shackleton over 100 years ago.

In 1914-17 Ernest Shackleton, the legendary explorer, had been beating to the Pole by Roald Amundsen as he tried to become the first to cross the continent. His ship sank in pack ice, but the heroic explorer and five men sailed 800 miles over open, stormy sea to South Georgia, from where a successful rescue could be launched.

Fast forward 100 years into the future and watch as Patrick Bergel complete’s his great grandfathers legacy in the Hyundai Santa Fe.

Bergel and small team take on almost 5,800km of icy terrain in bitter conditions. They not only had to cover extreme distances at temperatures down to minus 28-degrees Celsius but also had to plot new paths on floating ice caps that have never been travelled by wheeled vehicle before.

Getting to the South Pole was a special moment. The fact that this was a place my great grandfather tried to get to more than once and I was there, it felt like a genuine connection. What we did though was one thousandth as hard as what they did. You know, no comparison – modern appurtenances, comparative luxury. But it was an amazing journey, and an amazing achievement.

The 30-day expedition facilitated by Hyundai Motor was undertaken in a 2.2-litre diesel Hyundai Santa Fe with limited modifications

Although a heartfelt journey occurred, can you imagine drifting and speeding and sliding across miles and miles on open ice in a Hyundai Santa Fe? They must of had moments when they felt like Vin Diesel in The Fast and Furious.

You can find more information over at Shackletonsreturn.hyundai.com