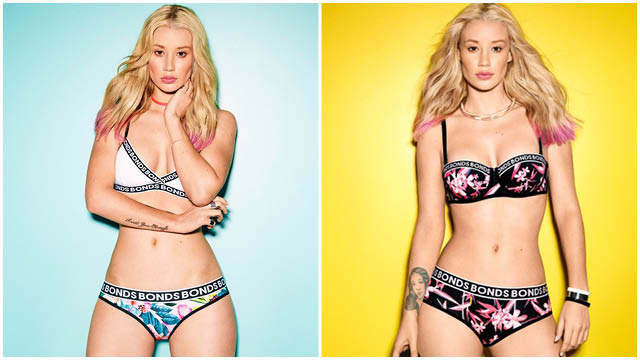 After announcing earlier this year that Iggy Azalea is the new face of BONDS. Iggy Azalea returns for the all new colourful and sexy BONDS100 campaign. BONDS the Australian underwear label is celebrating its 100th anniversary and to celebrate, Iggy is set to visit Australia for a party at the Circular Quay on Sydney Harbour. The rapper says about being a Bonds brand ambassador,

“I remember when Ruby Rose and Miranda Kerr were the faces of the brand. I thought they were so cool – powerful, but still sporty and sexy and I wanted to be like that. Getting a call from Bonds and thinking ‘that really takes me back’ made me want to do it”. The group strips down to their underwear in the new images. The Classics campaign spotlights different styles with colorful names like Boyleg, Chesty, Tube Bra, Guy Front, Sloppy, Trackie, Keenie and Cottontail.